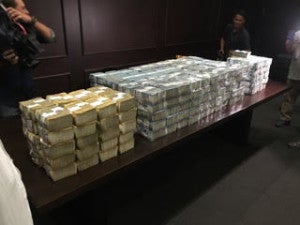 These are the bundles of cash totalling P250 million, which were turned over by casino junket operator Kim Wong to the Anti-Money Laundering Council, on May 4, 2016. (Photo by Daxim Lucas, INQUIRER)

MANILA — Saying that he was a man of his word, casino junket operator Kim Wong turned over to the government, on Wednesday, the fourth and final tranche of funds, which he said he unwittingly received as payment from Chinese gaming clients, without knowing that money came from the $81-million electronic heist on the central bank of Bangladesh.

He also beat a self-imposed one-month deadline for raising the funds and turning them over to authorities.

“I am a man of my word,” Wong said in an interview Wednesday morning in Pasay City as bundles of cash — in denominations of P1,000 and P500 bills — were prepared on a long conference table for delivery to the Anti-Money Laundering Council.

“I told the Senate Blue Ribbon Committee that I would return P450 million within one month,” he said. “I made that promise last April 5. Now I have fulfilled that promise one day earlier.”

The businessman told lawmakers that the funds were brought into the country — through an electronic bank transfer made to the Rizal Commercial Banking Corp. — by a long-time casino client Gao Shuhua and an associate named Ding Zhize, as payment for a P450-million gambling debt that Gao had incurred in 2014 while playing in Wong’s casino junket outfit.

Wong stressed, however, that he didn’t know about the funds’ provenance and neither did he inquire about it, since asking gamblers about the source of their money would be anathema in the casino business, and neither has it been required by law.

“But when I learned that it was dirty money, I volunteered to return it,” he said.

Along with several other parties, Wong is now the subject of a money laundering complaint filed by the AMLC with the Department of Justice.

The businessman told the Philippine Daily Inquirer on Wednesday, that he was looking forward to being exonerated so he could return to tending his junket operation business. He said his clients have shied away from him since the controversy broke in late February.

“Friends whom I’ve helped before chipped in to help me raise the funds that I’ve turned over,” he said. “Now they’re helping me. They lent me money.”

Wong has so far turned over to the AMLC for safekeeping — and eventual return to Bangladesh, once the courts clear it — $4.6 million as the first tranche, P38 million as the second tranche, P200 million as the third tranche and Wednesday’s P250 million as the final tranche, all in cash. This represents the entire amount that Wong and his company, Eastern Hawaii Leisure Ltd., received from the $81-million in laundered funds that went through RCBC’s Jupiter Branch in Makati City.

The total amount turned over to the AMLC was placed inside nine large plastic bags. It was delivered by Wong’s counsel Kristoffer James Purisima.

“Raising this amount wasn’t easy,” Wong said, crediting his “well-meaning friends” for their assistance. “They acknowledge my current predicament. The first P200 million came from Solaire. I paid [Solaire] earlier for a debt I owed and they lent me the same amount again.”

Asked what he would do after turning over all the laundered funds in his possession, Wong said he would move on, concentrate on growing his business and facing court cases.

Since most of his personal and corporate accounts have been frozen, he said doing business has been difficult. But he stressed that his reputation as a casino junket operator has remained intact and that his patrons have remained loyal.