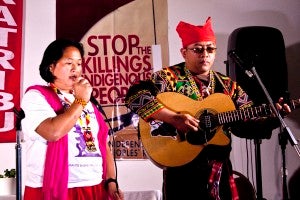 SAN FRANCISCO – Lumad leaders from the Philippines made a stop in San Francisco on their speaking tour across the United States to raise awareness of politically motivated violence and forced displacement allegedly aimed at them, and how this repression is linked to U.S. foreign policy and multinational corporate interests in the Mindanao region.

Leaders of “Lakbay Lumad USA: The Continuing Journey of Mindanao’s Indigenous Peoples for Peace and Justice” were hosted in an event called “San Francisco to Salupongan” by the International Committee for Human Rights in the Philippines (ICHRP) and Salupongan International, a grassroots network in support of the Lumad’s right to self determination, on April 29 at the African American Arts and Culture Complex at 762 Fulton Street.

Present were Argee “Pya” Macliing Malayao, a Bontoc-Igorot from Mountain Province in the Cordillera Region, who is the secretary general of KATRIBU-Katribu Kalipunan ng Katutubong Mamamayan ng Pilipinas (Coalition of Indigenous Peoples in the Philippines); Kerlan Fanagel, a Blaan from Malapatan, Sarangani Province, who is the chairperson of PASAKA Confederation of Lumad Organizations in Southern Mindanao Region; and Josephine Engyo Pagalan, spokesperson of KASALO (Unity of Indigenous Peoples’ Organizations in Caraga). 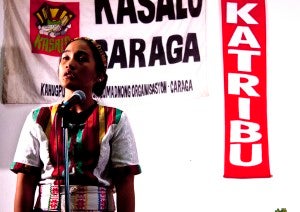 The tour also includes Monico Cayog, chairperson of KALUMARAN (Strength of the Indigenous Peoples of Mindanao), a founding member of the Organization of Enlightened Bagobos (SBM) and a Bogobo elder from Saliducon, Davao del Sur; and Francis Laminero, executive director/head of secretariat of Initiatives for Peace in Mindanao, who served as interpreter for the lumad.

Lumad is a term for indigenous people in the Philippines. In Mindanao, the Lumad is comprised of 18 major tribes. Since 1990’s the forests, mountains and agricultural fields of Mindanao have become battlefields where farmers and indigenous peoples are victims of widespread and intensive military campaigns.

“Our leaders, our schools, all our initiatives are all under attack by state forces as well as paramilitary groups,” Malayao said. “This is happening systematically because the laws of the government of the Philippines and policies, such as the Mining Act of 1995 which allow up to 100 percent foreign ownership of our mineral resources.”

They said that many foreign interests are eyeing their ancestral lands in the Philippines, especially in Mindanao. The Philippines has the world’s third largest gold deposits, more than half of which is in Mindanao.

“In the eastern part of Mindanao, the mining capital, it’s not the Filipino people who are benefiting from this. It is the few corporations, multinational and transnational corporations and a few elite from the Philippines,” Malayao said.

The Lumad have traveled from Mindanao to Manila to bring awareness of this issue since the government is not listening to their pleas, and not all Filipinos know about it. “Despite the three journeys going to Manila of more than 700 indigenous people from Mindanao, the government of the Philippines has not responded positively to our demands,” Malayao said.

The Lakbay Lumad USA is a continuing journey of the indigenous people of Mindanao from their communities to voice their demands for peace and justice. According to Malayao, it is about time that they brought awareness about the issue and got the support and solidarity not only from people in the Philippines, but also from the rest of the world.

“What we are facing in Mindanao is promulgated by the neo-liberal policies being implemented not just in the Philippines,” Malayao said. “This is about resource plunder. This is about monopoly of the few against the people of the world. We are soliciting your solidarity and we will continue our struggle.”

Salupongan Ta Tano Ikanugon is a Manobo term that means struggle for the defense of ancestral land. It is the name of the group of datus that formed an alliance to defend their land. Salupongan means unity. It is an organization that was set up by the Manobo tribe during their fight against the Alcantara and Sons logging operations in 1994. The Salupongan Ta Ta Ikanugon Learning Centers Inc. (STTILCI) also provides free education with over 150 schools to the Lumad and rural communities.

“Because of it’s successful defense, the Salupongan continues to practice the Lumad way of life which is characterized by the communal ownership of land,” Fanagel said. For many other indigenous people, Salupongan, a small organization, has become an inspiration in their struggle.

“The problems faced by the Manobo people are not just their problems,” Fanagel said. “These are problems being faced by other indigenous people groups as well.”

Ancestral lands are found in the mountains of Mindanao. Big mining corporations have applied for concessions in these mountains. In 2013, the Philippine government approved 500,000 hectares of land for the mining corporations in Mindanao. The government also approved 700,000 hectares of land, mostly in the lowlands, for rubber, banana, pineapple and other plantations. “This journey is really about our continuing defense of our ancestral lands,” Fanagel said.

Josephine Engyo Pagalan narrated the establishment of their community organization in Caraga. They were able to establish their own schools out of this organization and through the efforts of the parents in their community. Located in Hinayan, Lianga, Surigao del Sur, they have one building that hosts two schools: the Alternative Learning Center for Agricultural Development (ALCADEV) and the Tribal Filipino Program of Surigao del Sur (TRIFPSS) that provide elementary and high school education with a focus on agriculture.

“Children are taught how to plant, how to grow and how to appreciate and love land because it is the source of our life,” Pagalan said.

But they were forcibly displaced. Pagalan was witness to the September 1, 2015 killings of Manobo leaders Dionel Campos, Datu Juvello Sinzo and Emerito Samarca, executive director of ALCADEV Inc., by a government-backed paramilitary group in the presence of troops from the 75th Infantry Battalion of the Philippine Army. Samarca was stabbed many times and his throat was slit on the second floor of the school building.

“We have been experiencing repeated displacement of our communities throughout the years,” Pagalan said. “From September 1, 2015 until today, we continue to live in an evacuation center.”

Norma Capuyan, a survivor of the recent Kidapawan massacre, shared their struggle for food as result of the long drought brought by the El Niño phenomenon. “It has come to the point that our people are catching rats in the field so that we are able to eat,” Capuyan said. “This is not normal for us but because of the long drought there is nothing else that we can do.” 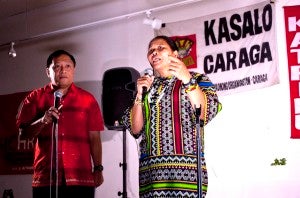 Aside from the drought, Capuyan and her people also experienced massive militarization. “We are not able to go to our farms because of military presence,” Capuyan said. The most painful effect of the drought, she said, was the hunger experienced by children.

“What really pushed us to resort to protesting is because we had children,” Capuyan said. “To stop their crying, we had to boil water for them to drink just to be able to fill their empty stomachs.”

Some 6,000 Lumad and farmers, children, adults, the elderly, including pregnant women, went out to protest and demand the release of the calamity fund that the government is obligated to provide in Kidapawan.

“For three days our cry was bugas, bugas, dili bala, rice, rice, not bullets!” Capuyan said. “But the government did not respond with rice.”

The government sent policemen, a SWAT team and fire trucks. They used water cannons and guns against the protesters. “I was a survivor of that massacre on April 1,” Capuyan said. “Our call was rice and they responded with bullets. On the spot, two were killed, 78 were arrested, including three senior citizens, three pregnant women, and children.”

The main message of Lakbay Lumad USA is the call for land, food and justice. They also want the government to stop bringing criminal charges against protesting lumad. “We want the government to be accountable for an internal security policy which is called OPLAN Bayanihan and to all its victims,” Pagalan said.

“I myself am facing these false criminal charges, I am hoping that you’d be able to help us pressure the Philippine government to drop these charges,” Capuyan said. “What unites us is our firm belief that this is a responsibility of the government. We continue to demand accountability from the government.”
Capuyan said they shared solidarity with the Ohlone tribe in the San Francisco Bay area. She hoped that people in the U.S. would be able to help the Lumad defend their lands.

The Lakbay Lumad tour will bring representatives of various tribes as well as faith-based advocates from coast to coast and through the Midwest to speak on the violence and forcible displacement they are experiencing at the hands of the Philippine government. They hope to inspire individuals and organizations to join them in immediate action to” Stop the Killings, Save Our Schools, and Protect Indigenous Life” and provide concrete support to Lumad schools and community projects.