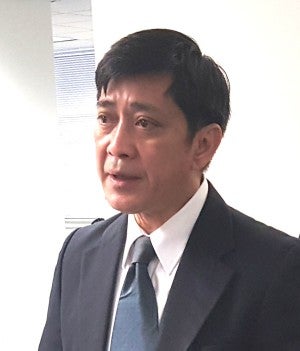 SAN FRANCISCO — With only a week before the May 9 deadline for overseas absentee voting, the Philippine Consulate in San Francisco announced that it has been getting back a number of return-to-sender (RTS) ballot packets they sent earlier to voters for mail-in voting.

In an exclusive interview with Deputy Consul-General Jaime Ascalon and Consul Reginald Bernabe at the consulate voting center, it was learned that as of May 1, some 500 names were posted on the consulate website whose ballot packets were returned to the consulate as they could no longer be located at the last address on record. These voters have changed residence without informing the consulate of their new address.

“We average around 90 RTS packets per day and as of May 1, around 1-2 percent of the estimated 46,000 eligible voters are listed and more are expected in the coming days. The listed names on the website would be updated as the other RTS come,” Ascalon disclosed. 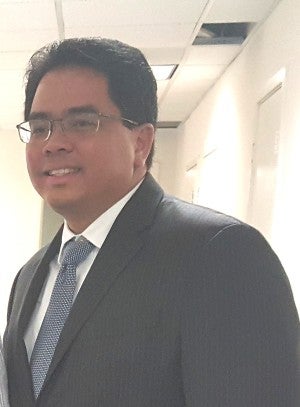 “Just this morning, a voter came in to claim he did not receive his ballot after transferring residence. But since his ballot packet has not yet been received back here, we advised him to leave his new address and phone number and he will be informed if he may claim his returned packet personally or, if time still permits, have it mailed to him,” Ascalon said.

Ascalon clarified that they cannot issue another ballot as voters are allowed just one ballot each.

“Only when the ballots are received back by us can we have their ballots sent back to them or have their ballots claimed here personally. So i advise those around 500 voters whose names are on our list as posted on our website http://www.philippinessanfrancisco.org./ (as of May 1, 2016) to inform us right away through email at [email protected] of their new contact details particularly the new mailing address,” he said.

“It would be much better if they can come over to the consulate to personally claim their ballots and actually fill-out their forms here so they can hand-in the accomplished forms right away. No need to mail-back that takes time especially now that we are only days away from May 9,” Ascalon added.

Bernabe reported that the number of mailed completed ballots is picking up, but the consulate is not allowed to give an estimate since the voting process is still ongoing and they expect a lot more to be received from the United States Postal Service (USPS) in the coming days.

“Rest assured that all the ballot packets were sent individually to the voters to fillout and send back here in time to be counted,” Bernabe said. “We are making an appeal to the voters not to wait too long to accomplish their ballots so they can be sent soonest, through mail or hand-in, right away for it to be counted in as time flies fast.”

Only around 30 voters so far have indicated that they would be personally voting in the consulate, the bulk of the ballots cast would really come by the mail.

Ascalon disclosed that so far they were happy with the turnout of completed ballots but that they also want more people to send back the ballots right away to avoid having their votes wasted due to late receipt. 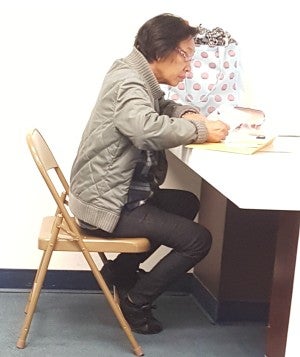 Dolores Alontaga carefully fills out her ballot right at the consulate premises to make sure it gets submitted on time and not lost in the mail. JUN NUCUM

“In terms of absolute numbers, we will surpass, if we haven’t surpassed it yet, the turnout in the last election in 2013. But we also have to consider that the number of registered voters have increased since the last registration from 15,000 to the present 46,000. The number has more than tripled,” explained Ascalon.

Ascalon also reminded the voters to follow the proper way of accomplishing or filling out the forms, specifically by darkening or shading the oval beside the name of choice and not make any markings on the name itself such as encircling the name, which cannot be read by the VCMs.

“Another reminder is not to vote more than the number of choices allowed which is one choice each for the position of the president, vice-president and party-list and 12 for senators. There may be less than 12 for chosen senators and still be valid but not more than 12,” reminded Ascalon.

Ascalon and Bernabe also said that they will not be canvassing the votes as this will be done at the Philippine Embassy in Washington, DC.

“We have 46 precincts here and we will have results one from each precinct. Grand total will be done in Washington, DC,” Bernabe divulged. “We will come up with a precinct count, all 46 of them, individually. By then, votes for individual candidates will be posted also by precincts.” 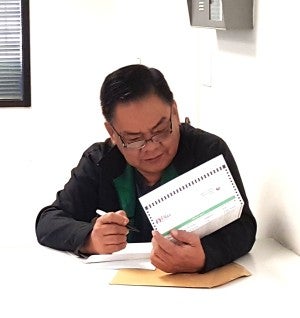 Victor Alontaga makes sure he shaded the right ovals of his choice on the ballot he is filling out. JUN NUCUM

Aside from San Francisco, there are 55 precincts in LA, 33 in Vancouver and 8 in Honolulu, Hawaii.

Seen filling out her ballot in the consulate was Dolores Alontaga of Bicutan, Taguig, who came with her husband Victor of Cebu and Laguna.

“The instructions in voting are clear and simple enough for easy understanding. This is my first time to vote since we have been here for only two years. We live near the consulate so i decided to fill out my ballot here so i can just hand them over my accomplished form to be sure it reaches them on time,” Dolores said.

“Voting here is much easier, more convenient and stress-free than when we were voting back in the Philippines. In Taguig, precincts were usually full of voters with hot and humid room conditions, especially when the polling places were about to close.”

Victor hopes that the voting process today is fool-proof and will have no more problems that the Precinct Count Optical Scanner (PCOS) machines had before.

“I didn’t have any problem voting here in the consulate. It was even faster and easier than I expected. I exhort everyone to exercise their right to vote. Do not waste this chance to be heard. I also hope that everything will be fine and we will be able to vote for the right leaders of our country,” Victor related.

Read Next
Fil-Ams connect with ‘Ricky Lee Film Festival’ in North Hollywood
EDITORS' PICK
Smart poised to turn PH into ‘Smart 5G country’ with nationwide rollout
Water remains our saving grace right now
Get 80% OFF Ignite 2020 Cyber Tickets starting 28 September
House to probe Facebook takedown of gov’t accounts
Feud is over: Velasco next Speaker on Oct. 14
Duterte meets with Cayetano, Velasco amid speakership issue
MOST READ
Velasco to take over as Speaker on Oct. 14
AMLC investigator says De Lima not involved in Bilibid drug trade
2 PDP-Laban allies in House jump over to Lakas-CMD
Duterte meets with Cayetano, Velasco amid speakership issue
Don't miss out on the latest news and information.