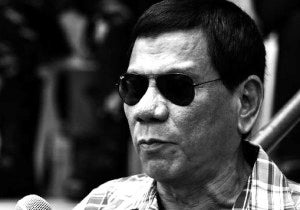 Choosing the right candidate can be a daunting experience when candidates and their supporters barrage voters with heaven-on-earth promises and peace-and- prosperity images.
A self-confessed death squad leader and serial killer, fantasizes about being first in line in the gang rape and murder of a beautiful Australian woman, discovered to have 211 million pesos in the San Juan branch of BPI bank, talks crassly and disrespectfully about his infidelity, his many affairs and sex life to millionaire businessmen (whose primary interest is also just to protect their fortunes) appears to now be the leading candidate in a presidential poll, assuming that poll is accurate.

He has many people deluded into believing that he is the country’s man on a white horse bravely and summarily ridding the country of criminals, corrupt politicians and government officials. Forget lengthy due process mechanisms, he says:

“I promise to kill them all and dump them in Manila Bay which will be red with their blood. In three to six months, there will be peace and order.” 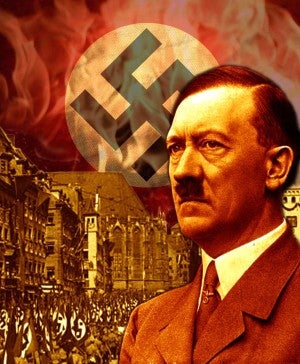 He is one of only two politicians that I know whose electoral platform has to do essentially with announced violence and extrajudicial murders, clothe in the name of utilizing these means “to serve the good of the people.” The other was a German named Adolph Hitler who was enthusiastically elected by the German people into the Bundestag (Parliament) and shortly after became the nation’s head as Chancellor.

Having been overwhelmingly elected with a platform based on violence, Hitler felt then that he had blanket approval from the German people to go to war and exterminate thousands of Jews, homosexuals and Gypsies in horrific genocide.

He had the cooperation of highly educated technocrats, businessmen and military people whom he mesmerized with his promises of a greater Germany. They loved their stature, power and wealth, which came with Hitler appointing them to positions of power. He formed his personal death squad, the elite SS, which brought terror to everybody who did not worship and respect him.

We had some sense of a similar situation during the time of the late dictator Ferdinand Marcos. And now, we have a potentially worst situation, a Hitler in the making in the person of Rodrigo Duterte. Such a person will use elements from the country’s military and police forces to form national death squad like Hitler’s SS, that will be fiercely loyal to him and can torture and kill citizens for any reason or no reason at all. He and his men can and will readily kill political enemies, critical journalists, entrepreneurs whose businesses they want, men whose women they want and terribly oppress the citizenry.

The most important criterion for a candidate aside from his competence and experience is his or her showing of a sincere love for God and fellowmen. A candidate who summarily murders people clearly does not have a sincere love for God and fellowmen. His supporters say it is okay because he kills only bad people. Not so.  For sure, he and his death squad also kill good people because he does not respect due process and Constitutional rights, which are established to protect the innocent. A murderer is odious in God’s sight; the same with obviously corrupt politicians who steal the people’s money, which could have gone to better education, health care, nutrition, good shelter, infrastructures, etc., for the people’s benefit.

Candidates who run because of ego or monetary gains from wealthy contributors, who do not have the needed experiential qualifications for the very difficult job of truly serving the people, also do not meet the criterion of sincere love for God and fellowmen because they would not have even ran if they did. Someone who cannot really be a good president for whatever reason — be it health, lack of the proper qualifications, lack of leadership qualities, ignorance of critical issues — should desist from running for office if he or she is sincere.

Choosing the right candidates for President and Vice President for this election need not be a difficult process. Just appraise the candidates and examine which ones manifest this most important criterion of true love for God and fellowmen, not only in their words but more importantly in their actions. Vote for the ones who do. You can’t go wrong. The whole rationale behind democratic elections is for people to select the most qualified leaders in terms of competence and integrity, leaders who truly love and serve them.

If Catholics, other Christians, Muslims and other well-meaning decent people are really sincere about their faith and care about their fellowmen, they need to apply this criterion when they vote. The man or woman they choose will do much good if elected. Then they and their selected candidates will truly be involved in the politics of creating a better world.