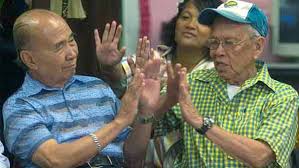 LOS ANGELES — Although Asian Americans are widely perceived as the model minority, a new report containing disaggregated data of older adults among them paints a completely different picture.

In Los Angeles County, Asian Americans and Native Hawaiian Pacific Islanders (NHPI) aged 50 and older are the second fastest growing racial group, posting a 56 percent and 50 percent growth rate from 2000 to 2010, respectively. Asian Americans and NHPIs fall only second and third to Latinos, respectively, who grew at a rate of 60 percent during the same 10-year period.

“[Asian Pacific Islander] older adults are incredibly vulnerable,” said Connie Chung Joe, executive director of Korean American Family Services, during the launch of the report on Wednesday at the Japanese American National Museum in Los Angeles. “They face enormous barriers to access and care due to many of the reasons we saw today – language, education lack of health care, stigma, etcetera.”

Among findings include that among seniors, Asian Americans are the most likely of all racial groups to rely on Supplemental Security Income, with 35 percent of Cambodians and 34 percent of Vietnamese at the top of the list.

“Without this data, we’re kind of blind to what are the real issues,” said Stewart Kwoh, president and executive director of Advancing Justice – LA. “That’s why AARP and Advancing Justice – LA teamed up. We thought by disaggregating this data and collecting the data, we could give educators, faith-based groups [and] non-profits the information they need to better educate and advocate your broader constituencies.”

As a result, the group resorts to temporary solutions while waiting for affordable housing. Amy Phillips, director of senior services at the Little Tokyo Service Center and co-chair of the Asian Pacific Policy and Planning Council’s Older Adults Task Force, said Filipino seniors often room together and even live with their children and grandchildren.

“But they see the economic pressure that their adult children are under and there’s quite a bit of pressure on the seniors to earn their keep. And sometimes it affects their health and mental health because they feel so much burden, so much pressure to do everything they can for the family. Even in retirement, it’s definitely not any kind of retirement as people imagine,” Phillips said.

Filipinos were also the second most populous Asian American group for those aged 50 and older, with about 117,800 residing in LA County in 2010, according to data from the US Census Bureau. Data from the Bureau from 2009 to 2013 further indicated that foreign-born Filipinos were the largest Asian American ethnic group to enter the United States in 2000 or later.

The report, “A Community of Contrasts: Asian Americans 50 and Older,” provided an overview of the largest group of Asian Americans 50 years old and above in the United States. However, among its limitations was that it did not provide more disaggregated data for the NHPI beyond basic demographic sections.