Imelda Marcos is ready to be the mother of all Filipinos 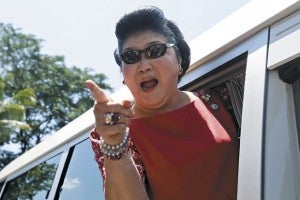 Imelda Marcos, who must be salivating at the thought of taking a big step on the way back to Malacanang if Bongbong wins, had this to say on Monday: “If you vote for Marcos and Romualdez, you will have Imelda as your mother whose love is boundless for all.”

“My heart is still here and my love remains strong for my fellow Filipinos,” she added at a rally in Leyte, according to an Inquirer.net report.

As I noted last year when I argued that Bongbong should run for president — yes, I did say that — Marcos Jr. running means Imelda returning to the spotlight … and saying crazy things.

Madame did not disappoint this week.

Again, she spoke of love. “We need to love each other not only for our nation’s future but also so our nation will be great again.”

And of the bigness of her heart.

“I am now 86 years old but my heart is still here and my love remains strong for my fellow Filipinos, especially for the country.”

Maybe because she’s in her late 80s, Imelda seemed more subdued, not as wacky as in the past. That’s unfortunate for that was what made her entertaining. And that was when she came across as true and transparent.

Take the time, in 1998, when she declared in an interview with the Inquirer: “We practically own everything in the Philippines—from electricity, telecommunications, airline, banking, beer and tobacco, newspaper publishing, television stations, shipping, oil and mining, hotels and beach resorts, down to coconut milling, small farms, real estate and insurance.”

Bongbong’s bid for the vice presidency is supposed to be setting the stage for the eventual return to the glory days of the Marcos era. Well, back in 1998, Imelda made clear what that golden era was about.

In any case, be ready for more of Imelda if Bongbong wins.

The good news is that Leni Robredo, the only sensible candidate in a crazy election season, has been gaining more support and is now leading the race for the vice presidency.

Bongbong couldn’t accept that. And he sounded like he was starting to panic.

“We are quite surprised by the new survey because all other surveys show otherwise. I hope this is not a pattern for cheating,” Bongbong said in a statement.

As some of my friends would say, “Pare, iyan ang apog.”

Robredo’s response was more vice presidential: “They have deceived us before; let’s not be deceived again.”

Of course, Imelda is used to being accused of deception. That’s what people all over the world have been saying about her and the late dictator for about half a century.

And I’m also going to guess that Imelda isn’t going to lose any sleep over Bongbong losing the election.

She’s got other things on her mind. After all, this is the woman who was known to have said: “Win or lose we go shopping after the election.”

And Imelda being Imelda, you can be sure she won’t be using her own money.