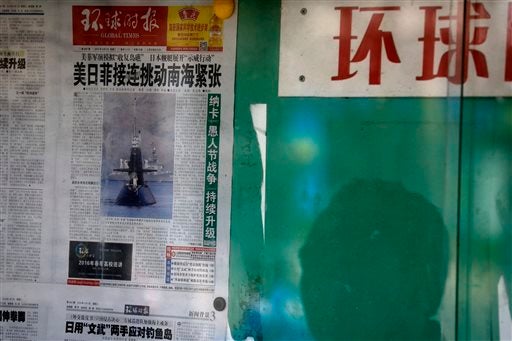 A Chinese man is reflected on a glass as he reads China’s nationalistic tabloid Global Times’ front page article with a headline that reads: “the U.S., Philippine and Japanese military steer tension in the disputed South China Sea” posted on a public newspaper bulletin board in Beijing, Tuesday, April 5, 2016. AP Photo/Andy Wong

BEIJING — China says it will send a warship and special forces for a multinational exercise next month that is also expected to include troops from the Philippines and other rival claimants in the South China Sea.

The May 2-12 maritime security and counterterrorism exercise will feature the militaries of the 10 countries of the Association of Southeast Asian Nations, along with those of the U.S., India and six other dialogue partners.

It will be held in Singapore and Brunei and in nearby waters of the South China Sea.