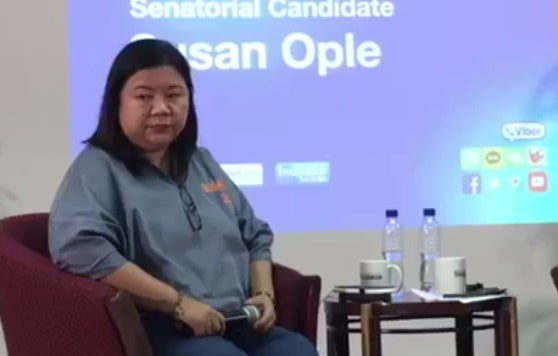 For the longest time, the Philippines has been losing Filipinos “by default” in search of greener pastures abroad. But less than two weeks before a major crossroad that is the May presidential election, millions of overseas Filipino workers (OFWs) can’t help but feel hopeful of better things to come.

This is the reality facing Filipino migrant workers today, according to senatorial aspirant Susan “Toots” Ople, daughter of the late senator and foreign affairs secretary Blas Ople and a known champion of OFWs.

In an INQLive interview at the Inquirer headquarters on Tuesday, Ople said OFWs, who have been taking care of other people in foreign countries, were longing for care from its own government.

“I think OFWs are really longing for care and comfort, and they are looking forward to the next administration to feel that security,” she said.

“All of us, any self-respecting government, do not want to see its own people leave their families to work abroad as domestic workers. We want them to stay here and be successful in our own turf … By default, we are losing our own countrymen because we do not have a clear jobs route map,” she added.

While the ultimate goal of not having to go abroad for employment has yet to be achieved, Ople said the least the government can do is to protect the rights, promote the welfare, and address the needs of the so-called modern-day heroes.

One way of doing so, she said, is the creation of a separate department for OFWs—something that she would prioritize should she win a seat in the Senate.

“I personally believe that it’s about time (to create a separate department catering to the needs of OFWs). There should be a Cabinet rank—a Cabinet secretary—for OFWs. This can also aid our domestic work force,” she said, citing the case of India and Indonesia.

Noting that the government’s approach toward OFW concerns should not be mere reactionary, Ople said the establishment of a new department was necessary to assist OFWs as early as recruitment stage.

“If a Cabinet secretary is focused on addressing the challenges of labor migration, then the government can anticipate the problems to be faced by OFWs in advance, and guide them as early as recruitment and deployment stage,” she said.

Ople admitted that creating a new department can be very costly, but added that it’s about time the government invest on OFWs for their contributions to the Philippine economy.

If she wins the senatorial race, the former labor undersecretary vowed to prioritize job generation in her legislative agenda, noting that “the best ally of poverty is unemployment.”

“If I make it to the Senate, there is only one question that I will be asking department heads and project proponents—how many jobs can that project generate? How many Filipinos will benefit from your budget?” she said. “With our large funds, we just need a laser focus to provide more job opportunities to our countrymen.”

But aside from lack of jobs, which she said was the root cause of other societal problems like crime, Ople said the government should also focus on improving the economy and addressing other issues like transportation and infrastructure to stop Filipinos from leaving the country.

“We should look at the differences in the pay rate. If we can improve the economy, that’s a big thing. If we can’t fix our other problems, that’s what hinders our growth,” she said.

Ople also vowed to institute reforms in the Overseas Workers Welfare Administration and fight age discrimination in the workplace.

Asked how she would rate the administration of President Benigno Aquino III in championing OFWs, Ople said she would give the government a “passing” but not an outstanding grade.

She said the country needs a president who has the political will to implement these reforms that will benefit OFWs.

“The office has a way of changing you. And once you’re in the Palace, that has its own tempering influence—the fact that you know you are responsible for the lives of 100 million Filipinos, the weight of that office will inevitably shape whatever the next president will say or do,” Ople said.

“Whoever wins the presidency, I’m very optimistic about our country. Even if the campaign period has been very toxic, I have high hopes that we will come together as a nation after the elections … Nothing is impossible. We just need a president who will inspire us to be the best that we can be,” she added.

Ople, who is also the president of the Blas F. Ople Policy Center, said what inspired her to do what she is doing, advocating the rights of OFWs, is to pay tribute to the legacy and in memory of her late father.

“I have to be relevant. I can’t hug my father anymore and I can’t bring him back into this world. But with every OFW that I get to help, I feel like being able to hug my father again. It feels like planting a flower in his garden. And as a daughter, that’s all I really want,” Ople said.

“All my life, every breath and every skill that I have, I feel like I have reserved them for every modern-day hero. I consider them as part of our family because my father loved them so much. I will fight for them. We will fix the system to protect their rights and we will not keep mum when they are being abused. I am already doing these things now, what more if I will be in the Senate? What drives me to do this is I can already imagine the reforms that I am capable of doing.”