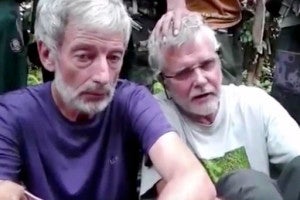 This image made from an undated militant video, shows Canadians John Ridsdel, right, and Robert Hall. Canada’s Prime Minister Justin Trudeau confirmed that the decapitated head of a Caucasian male recovered Monday, April 25, 2016, in the southern Philippines belongs to Ridsdel, who was taken hostage by Abu Sayyaf militants in September 2015. (Militant Video via AP Video)

MANILA — Beheadings must stop.  This was the curt reaction of Davao City Mayor and presidential candidate Rodrigo Duterte on the beheading of Canadian John Ridsdel by his Abu Sayyaf kidnappers on Monday (Apr. 25).
Duterte, who was in North Cotabato, to facilitate the release of a soldier from the New People’s Army, refused to comment at length on the beheading.

“It’s too early to comment,” he said. “I’m not yet the president of the Philippines. But this has to stop,” he added.

“The Abu Sayyaf Group must be extinguished,” he told a press conference in La Carlota City, Negros Occidental.

“I am outraged by the horrific murder of Mr. John Ridsel  at the hands of the terrorist Abu Sayyaf. The full force of the state and of the law must be applied to apprehend and bring the perpetrators to justice,” he added.

He said that since the abduction of Ridsel and the other hostages was reported, all means have been sought to free them.

“Let us double our efforts. Let us not give up hope that the others can be rescued,” he said,  as he appealed for the cooperation and support of all in this mission.

“Terrorism is bullying at its most worst  form,” he said. “Why kill a defenseless man just to make a point.”

“Terrorism preys on the weak and defenseless. Where is the courage in hurting let alone killing a defenseless person. It does not make you strong. It does not further your cause. It only leads to fear and subjugation which we know is your true purpose and we will not be cowed by that,” he said.

Roxas extended his condolences to  the family, loved ones and fellow citizens of  Ridsel.

“The terrorists Abu Sayyaf should be should be neutralized and face the immeasurable consequences of their brutality and inhumanity,” he said.

He said the 400 Abu Sayyaf members reported to have massed up on Sulu Island, should not be allowed to escape, and should be finished off.

“There is no room for the brutality exercised by the Abu Sayyaf…they must be extinguished,” he said.

The Abu Sayyaf killed Ridsdel on Monday and dumped his head on a Jolo street, Sulu.

The Abu Sayyaf is still holding another Canadian, a Filipina and a Norwegian resort manager.  SFM