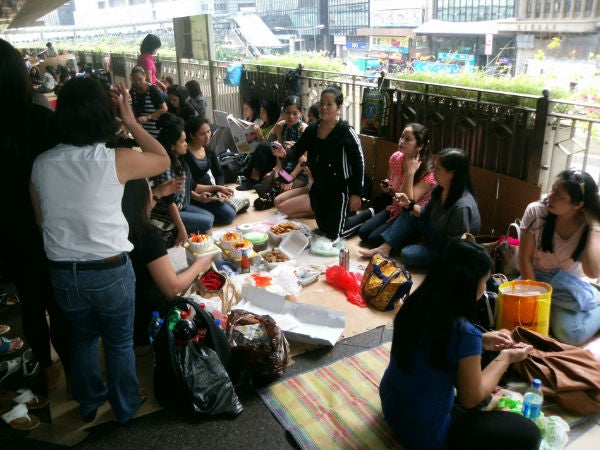 But for the past few weeks the colorful gatherings have turned political, as the Philippines heads towards an election in which its migrant workers could swing a tight race.

“It’s important to vote for change,” said 49-year-old Winnie Blaza, a domestic helper who has not lived in her home country for 20 years.

“I became a migrant worker because of poverty. We migrants are supporting candidates who want to help.”

The majority of Hong Kong’s Filipino workers are domestic helpers, an often-abused underclass in the wealthy city, whose plight has been highlighted by several recent legal cases.

But there is a sense of empowerment now, as they form part of a key demographic candidates are keen to corner: the 1.3 million Filipinos who are registered to cast absentee ballots.

Blaza is backing controversial candidate Rodrigo Duterte, who leads the polls despite remarks about the rape and murder of an Australian missionary that sparked protests from diplomats, the Catholic Church and women’s groups.

Likened by some to controversial US Republican candidate Donald Trump, he is held up by supporters as a maverick with a solution to corruption and crime.

For Filipina voter Madeline, 26 — who has a nursing degree but gets a higher salary working as a maid in Hong Kong — the ballot box is a chance to clean up politics.

“Crime is very rampant, especially corruption in the government,” she said, without specifying her favored candidate.

“The votes of migrant workers can be a game-changer,” added Eman Villanueva, an activist for Migrante, a political party that campaigns for the rights of foreign workers.

“This is a close fight and every vote counts.”

Duterte’s son visited Hong Kong as part of the campaign, as did rival candidate Mar Roxas.

US-educated investment banker Roxas and Grace Poe, a movie star’s adopted daughter, are among those taking on Duterte, a tough-talking mayor who has been accused of running death squads in his city.

Voting started earlier this month in Hong Kong, where more than 93,000 Filipinos are registered to vote, and ends on election day in the Philippines, May 9.

But, whichever candidate they favor, most simply want to make a living back home.

“The long term goal is to have jobs available in the Philippines so we don’t have to leave our country to survive,” says Villanueva.

For Blaza, return is the ultimate aim. “I really want to go back to my family,” she said.