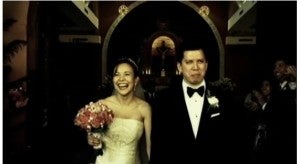 CHICAGO–Richard and Maribel Tinimbang, 38 and 40 respectively, the couple who were indicted for Medicare fraud amounting to $45 million, money laundering and conspiracy to commit immigration scam involving forced labor, were released on bail April 21.

The couple was released on a $20,000 cash bond and a $50,000 equity from a luxury condo they owned in the Chicago Loop despite warning from the federal prosecutor that they presented a flight risk.

Assistant U.S. Attorney Brooke Harper told Federal District Judge Rebecca Pallmeyer that the couple, like the mother of Richard, Josephine Tinimbang, who fled to the Philippines after she was indicted for various Medicare fraud charges and money laundering last June, is a “substantial flight risk.”

The couple’s lawyer, Dan Collins argued before Judge Pallmeyer that his clients have children and deep ties in
their community and so they should remain free without bond.

The Tinimbangs live in an expensive area of the upscale Chicago north suburbs of Lincolnwood where they maintain a fleet of expensive cars and 5,000-sq. ft. “McMansion.”

While Judge Pallmeyer agreed to let the couple to remain free after they pleaded not guilty of the charges filed
against them. The judge ordered them to surrender their passports, to refrain from contacting their alleged indentured servant and to stay out of the health care industry. These were in addition to their $70,000 bond.

Complaints filed by U.S. prosecutors against Josephine Tinimbang and 12 others last June and Richard and Maribel last April 11 carry penalties up to 85 years in jail if they are found guilty. The fraud and related charges were allegedly committed from 2008 to 2012.

To report healthcare fraud or to learn more about it, logon to: StopMedicareFraud.gov