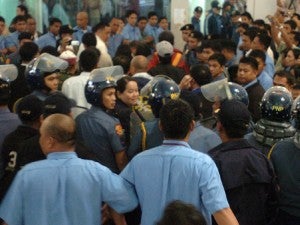 MANILA, Philippines—Philippine Airlines said a strike by ground employees has paralyzed flight operations at Manila airport and affected about 14,000 passengers.

PAL president Jaime Bautista said the national carrier is considering filing administrative and criminal complaints against about 300 employees who took part in the strike and work slowdown Tuesday.

Bautista said the striking employees should have been declared terminated effective October 1 under a plan to outsource thousands of jobs in catering, ground handling and flight reservations. The airline said the strikers can no longer be allowed to be involved in PAL’s ground services because of their action.

The workers’ union says the employees staged a protest not a strike to defend their jobs.