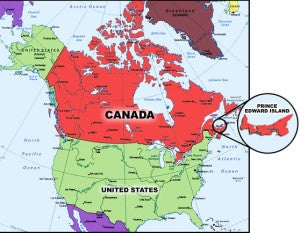 Filipino temporary workers at a fish packing plant on Prince Edward Island (in circle) are among TWFs who may have to leave Canada.

RED DEER, Alberta – Just like any temporary foreign worker, Genelyn Tividad wanted a better life for her family when she decided to hop on the plane and work for a fish plant in Prince Edward Island, Canada.

The 32-year-old single mother from Lubang, Occidental Mindoro was raising her then 8-year-old daughter when she was hired as a lobster tail packer in June 2012 by Southshore Seafoods Ltd., one of the four seafood processing plants known to hire Filipinos in PEI.

“I came here to secure a future for my daughter by saving my earnings,” said Tividad, whose four years in Canada will be up in June. But Canada’s unwieldy rules on temporary foreign workers like Tividad make her dream seemingly impossible.

Each year, Tividad along with 22 other Filipino workers in her company, work on a seasonal term that typically begins in May and ends by January of the following year.

As a lobster tail packer, she packs up to 10 lbs. of the product into a box from 7 in the morning until 6 at night. A shift would vary depending on the harvest, which is also highly dependent on weather and sea conditions. “Sometimes we work short hours sometimes long,” she said.

Beginning May to June, the peak season in the fishing industry enables the workers to work long hours often daily.

Since the government laid down the progressive cap on the number of temporary foreign workers a company could hire in July 2014, Tividad said she has witnessed manpower slowly dwindle at her workplace. She recalls some 50 Filipino TFWs were part of the staff when she first came in 2012.

Many TFWs had to leave and look for jobs because of (reduced number of) LMIA, or the Labor Market Impact Assessment, a certificate from the federal government allowing an employer to hire TFWs. Others took their chance at moving to other jobs with full-time hours in order to obtain permanent status.

“I knew of a worker who had been here since 2010 but because of the cap she was sent home last year. That’s the saddest part, because despite our employers who want us to stay, they have to replace us, and we still have to go because that’s the rule,” she said.

In February, employers in the seasonal industry, including seafood processors and fish plant owners, were given the go-signal to hire TFWs only for a period of 180 days or six months, to fill their staffing shortages and prevent any slowdown.

This move to help employers in the seasonal industry may not be as huge as industry observers think it is, said Josie Baker, coordinator for non-government organization Cooper Institute, based in PEI.

“The change is to allow 180-day non-renewable work permits for migrant workers this year, the only real change is that last year, it was only 120-days,” Baker said.

The 6-months work permit for TFWs benefits the employers in the seasonal industry but not the workers, Baker said, noting that the short period does not allow TFWs to recoup their money to pay down their debts as well as support their families.

For Tividad, she is hoping that the government will have a plan in place for these workers beyond the allowed period. “Now that they gave us the chance to fill our shortage with TFWs, I hope they have a good plan for these (workers) for next year,” she said.

“Bringing in the extra workers would solve the staffing issue in the short-term, but staffing shortage is a revolving issue in the Maritimes, hence the need for a long-term remedy,” said Tividad.

Living as a community

Tividad has adapted well in the island where a Filipino community also thrives.

“I look forward to becoming part of this community permanently in the future. I love my work here, I love the people that surround me,” she said.

“For many workers, they are not aware of the provincial employment standards. Social support is almost non-existent,” said Jesson Reyes, regional coordinator for Migrante Canada.

During organized forums held in Fredericton, New Brunswick in February and Charlottetown, PEI, Reyes observed that the workers have learned to share chores for their day-to-day living.

“They mentioned being far away from the mainland, which affects how they go about their daily lives like going grocery shopping all at once, scheduling trips to visit the mall,” said Reyes.

Many of the workers stay together in one house, making them feel less isolated, he said.

“Fish plants are vital to the local economies in the Maritimes because of the outflow of Canadians opting to work in (Western Canada). The employers we spoke with favor keeping the workers and removing the restrictions in the TFW program such as the 4-in 4-out rule,” Reyes said.

For Tividad, bouts of changes to the TFW program in recent years have spawned fear among the guest workers. She is calling on the government to abolish the rules such as the cap on TFW hiring, the 4-in 4-out rule, and to reduce the LMIA fee of $1,000.

“We abide by the law and rules since day one,” she said. “We are not job takers, we are workers and part of the community.”