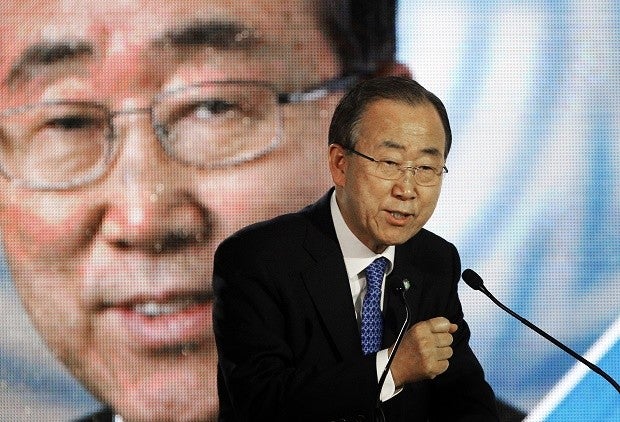 UNITED NATIONS—Leaders from more than 170 countries gathered at the United Nations on Friday to sign the Paris climate deal, a record turnout that boosted hopes of quick action on combating global warming.

“This is a moment in history,” UN Secretary General Ban Ki-moon said after announcing that 171 countries were set to sign the accord.

“Today you are signing a new covenant with the future,” he said.

Held on Earth Day, the ceremony comes four months after the hard-won deal was clinched in Paris and marks the first step toward binding countries to the promises they made to cut greenhouse-gas emissions.

While the United States, China and India—the world’s top greenhouse-gas emitters—were not represented at their highest level, some 60 heads of state and government were set to be among the signatories.

The Paris agreement will come into force as soon as 55 countries responsible for 55 percent of the world’s greenhouse gases have ratified the accord.

The target date for the agreement to begin is 2020, but momentum is building up to ensure the accord enters into force much earlier.

Hollande called on governments to quickly ratify the Paris deal and singled out the European Union, saying the 28-nation bloc should “lead by example” and give final approval before the end of the year.

China and the United States have said they will ratify this year and are pushing for others to follow suit so that the agreement becomes operational possibly as early as late 2016 or 2017.

But the European Union may take up to a year and half for the ratification.

A race against time

Caught in election-year turmoil, the United States plans to ratify the Paris accord with an executive agreement, bypassing the Senate and setting up a complex process for any future president wishing to pull out.

Moving quickly, 15 countries, mostly island states, have already fully approved the agreement and will formally present the completed ratification to the United Nations.

Oscar winner and environmental campaigner Leonardo DiCaprio was to address the gathering.

“We are in a race against time,” Ban told the gathering at the UN General Assembly.

Last month was the hottest March in modern history and 2016 is shaping up as a record-breaking year for rising global temperatures.

Agreed by 195 nations, the Paris deal sets the goal of limiting global warming to two degrees Celsius above preindustrial levels by moving to clean energy.

Ban stressed that the window for keeping the global temperature rise below 2 degrees Celsius was rapidly closing.

The Paris deal also places an onus on rich nations to help poorer ones make the transition to a low-carbon economy.

The agreement was seen as a triumph for Ban who pushed for the deal throughout his tenure and has listed the agreement in Paris as one of his proudest moments as UN chief.

The United States, however, remains a key concern for the Paris Agreement as other countries worry what the next president might do. Analysts said that if the agreement entered into force before US President Barack Obama leaves office in January, it would be more complicated for his successor to withdraw from the deal, because it would take four years to do so under the agreement’s rules.

“Walking away from the agreement would instantly turn the US from a leader to a defector” with serious diplomatic consequences, Elliot Diringer of the US-based Center for Climate and Energy Solutions think tank told reporters on Thursday.

The Obama administration was expected to treat the deal as an executive agreement, which needs only the president’s approval.

As the Paris Agreement moves forward, there is some good news. Global energy emissions, the biggest source of man-made greenhouse gases, were flat last year even though the global economy grew, according to the International Energy Agency.

Still, fossil fuels are used much more widely than renewable sources like wind and solar power.

While the United States, China and India—the world’s top greenhouse-gas emitters—will not be represented at their highest level, there will be some 60 heads of state and government on hand for the signing.

Among those will be leaders of island states such as Fiji, Tuvalu and Kiribati that face oblivion from rising sea levels. They will formally present the already-completed ratification by their parliaments.

“Early ratification and entry into force will send a strong signal to governments, businesses and communities that it is time to fast-track climate action,” Ban said earlier this month.

He said the real challenge can be summed up in one word: “implementation.”

The deal was seen as a triumph for Ban who pushed for the deal throughout his tenure and has listed the agreement in Paris as one of his proudest moments as UN chief.  Reports from AFP and AP

Up to 170 states poised to sign landmark climate agreement