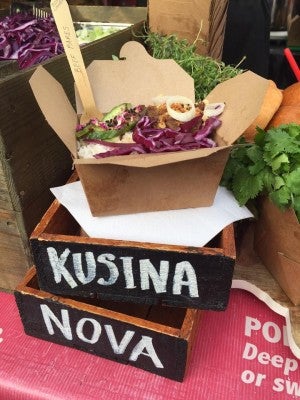 Novavita Canlas Manabat, proud owner of Kusina Nova, relocated from the Philippines to England 17 years ago. When she arrived in the country, she barely knew how to cook, familiar only with recipes home cooked by her grandparents and maternal aunts in Manila.

Today, all that has changed.

The first ever Kusina Nova stall was launched at Clapham Common’s artisanal Venn Street food market in 2012, but prior to that, Manabat was involved in private catering, dabbling in Asian fusion and Jewish-Asian cuisine.

“When I came to England, I honestly couldn’t cook,” recalls Manabat. “But you know when you move abroad and don’t know anything or anyone? You miss what you do know. So I thought, ‘I’ll save up a bit of money and start something I’d like to do – cooking.’”

“I learned all my skills after training with English chefs for almost a year in the Isle of Wight. That’s where I started learning about kitchen work and making recipes from scratch.”

Eventually, after gaining confidence in cooking dishes such as adobo and sinigang, Manabat grew more adventurous, wondering why there was no gourmet Filipino restaurant to be found in her area.

“I had access to traditional Filipino food at restaurants, but I could make that at home,” says Manabat. “My Kusina Nova recipes were inspired by my childhood memories of what my grandparents cooked, especially for fiestas – food made only for special occasions. I wanted food that people could eat regularly. That’s why beef pares is my signature dish.”

She wanted to make her childhood food more special; for example, not too many Filipinos even know about beef pares. “I thought, why don’t I bring something to the London food scene that makes even Filipino locals say, ‘Wow, I’ve never had this before.’”

Kusina Nova’s online presence has been one of the main drivers of the stall’s success. So far, campaigns such as social media shout outs and reposts have worked well. “Social media has so much to do with how popular we are at the moment,” says Manabat. “People will send messages asking if we’ll be at a certain market.”

But despite the stall’s strong social media game, its actual offerings are what keep Kusina Nova in demand. Manabat is a firm believer in first impressions. When customers sample her food for the first time, they are pleasantly surprised by the taste. 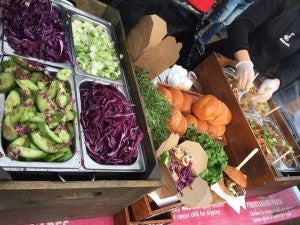 “I’ve experimented with a lot of Filipino recipes. I make sure that what I give to customers is something that, once tasted, makes them want to come back,” she explains. “Even the guys who work for me now, I train them so well that even if they make it, they finish it so well that it tastes like I’ve made it. It’s very hands on work, actually.”

As a result of Manabat’s quality checking, customer feedback about Kusina Nova’s food has been “overwhelmingly positive,” with a roster regular customers, especially on Saturdays at Venn Street market.

“They think the food should be in a restaurant,” Manabat says, proudly. “The customer base we’ve developed is not only made up of Filipinos but actually mostly Europeans, Australians and Americans.”

“They don’t know much about Filipino cuisine. Lots of people who travel to the Philippines look for adobo. I used to do adobo at another market but I wanted to give them something else. So I have chicken asado and beef pares at the moment. I’ve got pork belly steak in lemon and lime sauce, too. People think ‘oh, it’s just pork belly steak’, but I make the sauce really special. So when a customer has a taster, they’re surprised by how the flavours blend.”

Filipino food with a twist

Manabat explains that experimentation and presentation is key to keeping her Filipino menu special.

“As a foodie, if I eat somewhere, I make sure that I observe how they make and present it. Londoners like things laid out prettily, so I decided to do that with Filipino food. The recipes are easy to make – I think of home, how our ancestors made it for us, and I add something special to make it more appealing to Western customers.”

For her chicken asado, for example, Manabat sweetens the dish using orange juice instead of sugar. To make it even more interesting, she adds shiitake mushrooms. “As you know, Westerners really like chicken and mushroom but usually with cream. I made it more Filipino by mixing it with OJ and soya.”

“I use fresh herbs all the time,” adds Manabat. “On everything I make, my finishing touches are fresh herbs.”

All food ingredients for Kusina Nova are sourced locally or from farms around the UK. Manabat buys the majority of her meat from Dickinson, an established local butcher in her area that supplies premium Scottish beef, as well as English pork and chicken.

“If I can’t buy ingredients where we’re based in Fulham or Kensington, then I buy from a supplier whose origins can be traced. Aside from the Filipino ingredients, everything is English.”

Manabat stresses the need for more gourmet Filipino food stalls to flourish in the UK market. “When I applied for Camden market they said, ‘Yes, start tomorrow if you want,’ because they hadn’t seen anything like Filipino food before. It’s important for markets to see visually how you will appeal to their customers. I think it’s a shame that not a lot of Filipino food stalls offer strong visual presentation.”

She observes further: “Filipino restaurants here are good, but their food is not something I’d think of wanting to eat all the time. For me, as a foodie, if I want to eat somewhere, I would want to have something there that makes people come back. If their recipes were a little more special, they could come out with something even stronger. I want to say, ‘This isn’t something I could have at home. This adobo is something I’ll be coming back for in a month’s time with friends.’”

Looking to the future

Manabat envisions adapting the soul of her food stalls into an intimate, traditional restaurant somewhere in London – but only when the time is ripe, and without sacrificing the consistency of her food.

“I want a really small restaurant. Something intimate, manageable on a daily basis, that wouldn’t sacrifice the quality of what we’re serving every day. In my mind, I’d like my place to be rustic looking. I’d use Philippine furniture and textures like capis incorporated into the design. But I’d want to keep it low-key.” 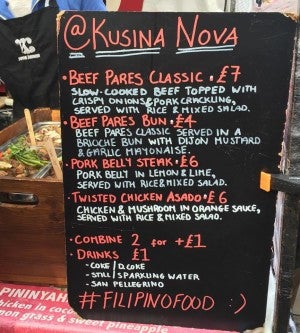 Manabat adds: “The area of London would make a difference, too. I think Londoners are ready for our food. It’s something that Filipinos should strive to give them. I’m really glad that I started the street food business, because it’s one step closer to making a restaurant happen.”

When Manabat has time for catering at events and parties, she typically fuses French or English cuisine with Asian, to make the menu more appealing to her clients. But for now, she is concentrating full-time on growing awareness of Kusina Nova’s food stalls.

“I scaled down on catering because I wanted to focus on opening another stall. That’s another step to increase awareness about how good our food is before opening a restaurant straight away.”

Regarding the future of Filipino food in the west, Manabat is optimistic. “At some point, if there’s one place that people could say, ‘I’ve seen this in Time Out or in Conde Nast Spain’, then I can see Filipino food going to really high places,” says Manabat. “It will take time, but I think the customers in London are ready for it.”

“Hopefully people will come and try our food – Europeans, Asians, everyone. It’s time for them to see how good our food, Filipino food, really is.”