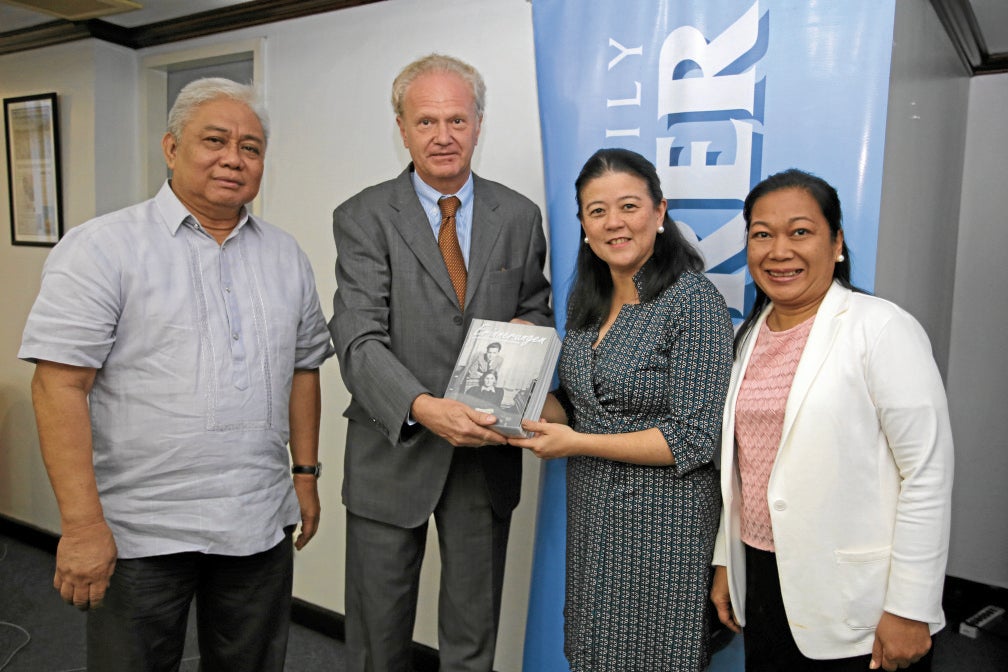 Much has been said about how the Philippines helped Jewish refugees fleeing Nazi persecution in Europe during World War II, but not much about how the survivors paid it forward to the country.

Ricardo Ramos of the Pilipinas Sandiwa Heritage Foundation Inc. (PSHFI) shared stories of survival and success of Jewish refugees from Austria during the turnover of a three-volume work titled “Erinnerungen: Lebensgeschichten von Opfern des Nationalsozialismus/Exil in Asien” (Reminiscences: Life Stories of Victims of National Socialism [Nazism]/Exile in Asia), donated by the PSHFI to the Philippine Daily Inquirer on Wednesday.

“Thank you for giving the Inquirer the honor of keeping these books. You’ll be happy to know that … we like to focus on stories that celebrate heroism or positive things that the Filipinos have done,” Inquirer president and CEO Sandy Prieto-Romualdez said.

She added that the Inquirer has an active library, and students and professionals are welcome to use it. Library hours are 1 p.m. to 5 p.m. Monday to Friday.

In this digital age, the printed word is still very much valued because some information is still not available online, Romualdez said.

“Reminiscences” was published by the National Fund of the Republic of Austria last year for the Victims of National Socialism, which was established in 1955 to provide special assistance to the victims of Nazism.

Ramos said the Inquirer was chosen as recipient of the work because it was “the newspaper that has an appreciation for culture, heritage and history.”

“The Inquirer has recently published stories about the role of former President Manuel Quezon and the Filipinos in the rescue of the Jews in the country as well as the award conferred on Quezon by a 103-year-old movement against antisemitism held last month in Florida,” Ramos said.

He was referring to the report “MLQ to receive award for inviting Jews to PH” by Tarra Quismundo published in the Inquirer on March 20.

Quezon adopted an open-door policy and welcomed 1,200 Jews rendered stateless from 1937 to 1941 by the Nazi regime.

A copy of a list of Jewish survivors from Austria and Germany, obtained from the Survivors Registry of the US Holocaust Memorial Museum, was also given to the Inquirer.

The list was provided by Ralph Preiss, son of a Jewish refugee from Germany.

Stories of how 23 Jews from Austria rebuilt their lives in Filipino communities and in other Asian countries are gathered in “Reminiscences,” drawn from the survivors’ narratives, newspaper clippings and documents and accompanied by photographs.

In her foreword, Hannah M. Lessing of the National Fund said of the 23 survivors featured in the work, seven chose to remain in Asia, five returned to Austria and 11 had died.

In Book 1 is found the story of Paula Brings, one of the few refugees who chose to become Filipino citizens after  World War II. Her husband, Theodor, found his first job in the Philippines as a professor of physics at the University of the Philippines (UP) Baguio.

The couple from Vienna first went to Australia. When they could not find jobs there, they traveled to the Philippines after being told by a friend about an opening for a physics professor at UP Baguio. Theodor had a doctorate in physics and mathematics.

Paula, in the book, vividly recalls the smell that greeted them when they arrived in Baguio.

“And then there was a wonderful smell, we did not know what the smell was through the pine trees. And it was the dama de noche … which blooms at night and this was our fist experience with dama de noche,” Paula, a nature lover, says.

Dama de noche—lady of the night—is a nocturnal flower that releases a powerful perfume when it blooms. It is also called night-blooming jasmine.

Also narrated in the first volume is the story of Herbert Zipper, who became a conductor of the Manila Symphony Orchestra, Asia’s first symphony orchestra. Also a composer, Zipper pushed for early music education in the Philippines.

There is also the heartbreaking story of Margarethe Welisch, whose family of seven lost everything when they fled Austria only to lose everything again in the Philippines in the Battle of Manila. They migrated to the United States after the war.

Other refugees also left the Philippines to get college education in the United States, where they eventually settled, Ramos said.

“But some who had the opportunity to migrate to the US chose to stay and work here in the Philippines. There’s really a strong sense of loyalty. [Up to this day], some still consider the Philippines their homeland,” he said.

In the book, Welisch recounts that her family managed to get out of Austria because of a new law that allowed anyone who could present a visa to leave in 24 hours. A Catholic German who lived in the Philippines helped them get the visas.

Featured in Book 2 are stories of refugees from Austria who went to other Asian countries such as Indonesia, India, Thailand, Burma, Vietnam and China.

Müllner shared the story of Dr. Richard Frey, who arrived in the International Settlement Zone in Shanghai in 1938 as a refugee. Frey became a Chinese citizen and was elected to a Chinese parliamentary advisory body. He died in 2004.

Book 3 contains the story of Mona Lisa Steiner, whose botany studies was cut short by the Nazi occupation of Austria. She chose to migrate to the Philippines to continue her studies. She became an expert in tropical flora, particularly in orchids.

In 1997, President Fidel Ramos conferred on Steiner the Banaag Award, which is given to Filipino and foreign individuals or associations for contributions that have significantly benefited a sector or community in the Philippines.

Steiner’s story is supplemented with pictures from her childhood in Vienna up to her family’s stay in Manila. Her residence certificate issued by the Commonwealth government in 1946 is pictured in the book.

“We should never forget what had happened during those dark years of a century shaken by two world wars, regional wars, civil wars, atrocities and genocides, dictatorships and totalitarian regimes,” Müllner said.