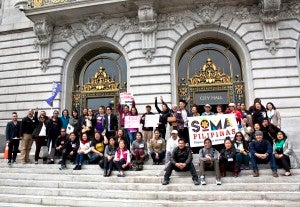 SAN FRANCISCO –A new chapter in Filipino American history was made Tuesday, April 12 when the Board of Supervisors unanimously approved the establishment of SoMa Pilipinas Filipino Cultural Heritage District.

Present were representatives of various groups in the Filipino community, such as SOMCAN, United Playaz, Veterans Equity Center (VEC), Bindlestiff, the Filipino American Development Foundation (FADF), Kearny Street Workshop and Kularts, as well as many supporters from the community.

Also included are historically important sites in other parts of the city such as the I-Hotel, Gran Oriente Filipino, Rizal Apartments, the Iloilo Circle building and surrounding areas including Rizal Street, Lapu Lapu streets.

“But no actions had been taken on the part of the city to move it towards realization since then,” Chan said. “It is only because of the activism of the community in response to the current development boom in SoMa that this proposal was able to come forward and be realized.” 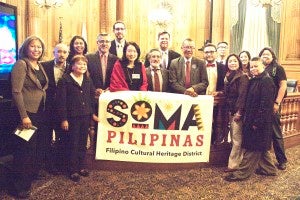 SoMa Pilipinas staff, community leaders and organizers with the SF Board of Supervisors headed by Jane Kim. WILFRED GALILA

Currently the largest Asian American group in California, Filipinos have a long history in San Francisco. During the 1920s and 1930s, San Francisco had the highest density of Filipinos in the country.

Waves of urban renewal and redevelopment pushed the Filipino community out of Manilatown in Kearny Street, the Fillmore and the Yerba Buena neighborhoods. Many Filipinos settled in the SoMa, and by the 1970’s were the dominant population there. To this day SoMa continues to be the cultural center of the community.

“Passing SoMa Pilipinas is and opportunity to make sure that our organizations, our businesses, and residents like me can continue to be rooted in the City. It’s an opportunity to make sure everyone can see SoMa how I see it, a neighborhood of beautiful cultures, a rich heritage and full of loving, friendly and talented people that we need to recognize, invest in, and protect,” said Juvy Barbonio, a Filipino SoMa resident.

As development pressures heightened in SoMa in recent years, FADF identified and compiled the Filipino Cultural assets in the neighborhood. A tour was developed to showcase the important history and accompanying Filipino landmarks, collectively known as SoMa Pilipinas. The establishment of a Filipino Cultural District ensures the lasting presence of the Filipino community in San Francisco.

“I am excited for the approval of SoMa Pilipinas because of the broad support and participation of the Filipino residents and families for this designation,” said Bernadette Sy of FADF. “In the next six months, I look forward to continuing this journey with the Filipino community in creating an implementation plan for SoMa Pilipinas that ensures that the Filipino families, businesses, and cultural arts continue to be part of San Francisco’s diverse cultural fabric,” said Sy.

Supervisor Jane Kim, who lives right across from Victoria Manalo Draves Park, which was named after the Filipino American Olympic gold medalist diver, recognized the Filipino community’s invaluable cultural legacy and part in San Francisco’s history. She is the author of the legislation, with the help of Policy Director April Veneracion Ang, and spearheaded successful unanimous passage at the Board of Supervisors after more than a decade of inaction by city government to make SoMa Pilipinas a reality.

“I am proud to establish SoMa Pilipinas as a vibrant Cultural Heritage District that is a source of pride for San Franciscans and Filipinos across the region,” Kim said. “I am grateful for the leadership of Bernadette Sy and the Filipino American Development Foundation (FADF) for anchoring the vision of SoMa Pilipinas for more than a decade.”

“The formalization of the district is a long haul strategy,” Chan said. “We will be doing many community meetings and hope that the regional community will join us in sharing their interests and desires for SoMa Pilipinas.”

In particular, the SoMa Pilipinas staff is looking forward to working with the business community to identify business opportunities as well as increased visibility. The staff is working for more coordination of cultural events.

“We will be working on our social media so people coming to SF can plan and know what cultural events are happening. Barrio Fiesta, Pistahan, Tagalog classes, book launches, film showings that they can include in their activities.” said Chan. “We know it is ambitious but hope that this can occur by October, Filipino heritage month.”

According to a representative of Supervisor Jane Kim’s District 6 office, they are “absolutely thrilled by the passage of the legislation and with the successful establishment of SoMa Pilipinas. The next step would be a year-long process to use land use tools—such as zoning—and economic development strategies to ensure that there is: 1) a halt to the displacement of community-serving organizations, businesses, as well as families and residents and artists from the neighborhood; and 2) an investment by the City in preserving and growing the Filipino and Filipino American community in the SoMa Pilipinas district.”

They added that “the creation of SoMa Pilipinas should also provide significant notice to any entity that wants in the future to become a neighbor and stakeholder in this district, that they must respect the existing community and be a part of acknowledging and honoring its importance to the City.”

Bernadette Sy, whose father is Mario A. Borja, M.D. who was the leading founder of FADF and instrumental in the establishment of the Bayanihan House and the Bayanihan Community Center in SoMa, is enthusiastic about this new chapter in Filipino American history.

“The Filipinos have a rich immigrant history in San Francisco. The stories about the Filipino immigrant’s challenges, struggles and perseverance to find opportunities for themselves and their families is the history of future generations of Filipinos in the U.S. This is their history. They should know, claim and celebrate SoMa Pilipinas.”