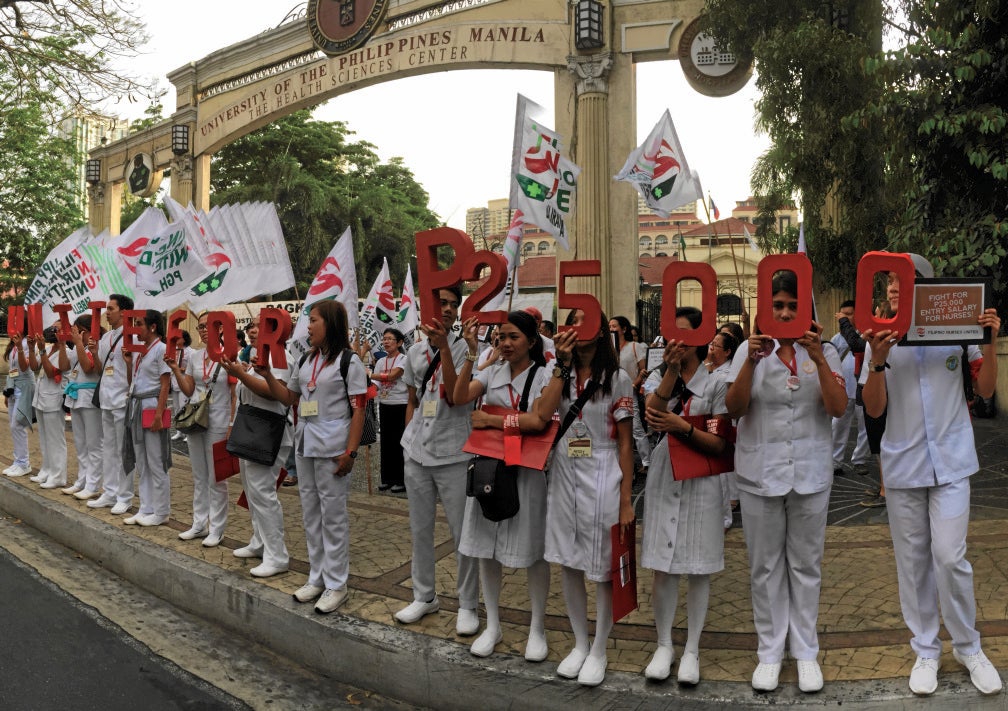 SICK OF LOWWAGES Members of the FilipinoNurses United join a unity walk to the Philippine
General Hospital on Taft Avenue in Manila to press the government to standardize their starting monthly
pay at P25,000. The nurses will wind up their two-day congress today. ANNELLE TAYAO-JUEGO

After a year of working in government-run Biliran Provincial Hospital, Jane (who requested that her full name not be published) was ready to call it quits. Hired as a “casual employee” with no benefits and job security, the 22-year-old said she was looking forward to better pay abroad.

“[I’ve stayed on] because my mother told me to get the minimum experience needed to apply abroad,” said Jane who, at a nurses’ convention in Manila on Thursday, cited her meager pay of P175 a day, the absence of leave benefits and the dire conditions in public hospitals that sometimes compel the staff to pay for their patients’ medication because the government could not provide them.

“We are entitled to two days off every week, but we have a no-work, no-pay policy. We lack nurses [in Biliran], but we can’t recruit because of the dismal pay,” Jane said, adding that she plans to apply for a job either in Australia or Florida.

Jane’s story is one of the worst heard by around 100 registered nurses who attended the first Filipino Nurses United (FNU) congress in Bayview Park Hotel on Roxas Boulevard, Malate.

The group, comprised of nurses from all over the country, gathered to discuss their objections to the “deceptively unjust” Salary Standardization Law of 2015 (SSL IV), as well as to call for government approval of House Bill No. 5541 that would upgrade the minimum monthly salary of nurses to P25,000 and provide them with other benefits. The bill was coauthored by Bayan Muna Representatives Neri Colmenares and Carlos Isagani Zarate.

FNU convenor Eleanor Nolasco lamented how the Philippines continues to lose many of its skilled nurses—Jane among them—to more progressive countries. FNU, she said, was formed to organize registered nurses in the fight against contractualization in their ranks, and to push government to standardize their starting pay at P25,000.

Robert Mendoza, national president of Alliance of Health Workers who was also at the convention, described the Salary Standardization Law as “not fair” to health workers.  While the law grants all government workers a salary raise of P2,000 spread in four tranches over four years (or the equivalent of a P20 increase in daily pay), it also threatens the benefits granted health workers under Republic Act No. 7305 or the Magna Carta of Public Health Workers.

Mendoza said these benefits include a hazard pay, longevity pay, night differential and a subsistence and clothing allowance. “These benefits, which we worked hard to achieve, are not even uniformly enjoyed by all government health workers. In effect, we stand to lose more with the SSL IV. It’s not fair to health workers because we have (more benefits under) our own magna carta,” he said.

The first day of the two-day congress was capped by a unity walk from Bayview Hotel  to the Philippine General Hospital (PGH) on Taft Avenue, where the nurses formed a human chain to express their solidarity with all registered nurses, especially those barely earning enough to make a living.

Nolasco said FNU, which has a chapter in PGH, is open to all registered nurses, even those who are not working in the medical profession. While others leave the country for better-paying jobs abroad, she said  many registered nurses who choose to stay are forced to seek employment in other fields, particularly in the business process outsourcing sector, because of the low pay in both private and public hospitals.

FNU was formed a year and a half ago and continues to recruit members, Nolasco said. The group visits hospitals in different provinces to consult with nurses on their working conditions, she added.