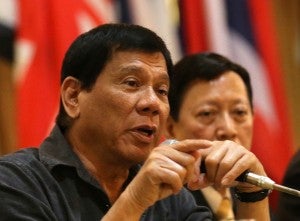 MANILA — The camp of presidential candidate and Davao City Mayor Rodrigo Duterte clarified on Wednesday that the tough-talking mayor has always been in full support of the Philippines’ arbitration case against China over the West Philippine Sea, and he would continue to do so.

“As a Filipino, Mayor Rodrigo Duterte fully supports the case now pending in The Hague questioning China’s occupation of areas in the West Philippine Sea that the Philippines considers its territory,” Duterte’s camp said in a statement.

“He is hopeful for a favorable ruling for the Philippines,” it said.

Duterte earlier said he would be willing to die in the contested Spratly Islands if the situation came to that.

Duterte has been criticized by his rivals for his weak position in the South China Sea disputes and his willingness to enter into a deal with China.

“The mayor believes the Philippines should continue to work closely with other countries towards finding a solution to the issue,” it said.

But if the government’s multilateral approach would prove to be inadequate to resolve the issue, Duterte would explore other options, including directly talking with China, his camp said.

“Mr. Duterte further believes that any military conflict involving the Philippines over the West Philippine Sea should not happen as it will derail the Philippines’ economic growth,” Duterte’s camp said.  SFM