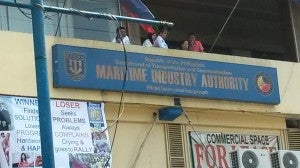 SUBIC, Zambales — A couple who owns fishing boats in this town filed on Wednesday (Apr. 13), a marine protest with the Philippine Coast Guard (PCG) and the Maritime Industry Authority after their service boat was damaged by a passing foreign vessel recently.

Boat operators Crispin Bajeta Sr. and Glorybelle Bajeta said the foreign vessel with the markings “Madre De Deus” plowed into their boat’s anchor cable at about 7 a.m. on April 7.

The Bajetas said two of the boat’s three crewmen fell into the water and almost drowned due to the collision that happened at Sampaloc Point in nearby San Antonio town.

According to an initial report from the PCG detachment here, the foreign vessel was sailing north when it struck the Bajetas’ boat.

The boat’s outriggers were damaged, causing it to tilt to its side, the Bajetas said.

PCG officials said they were coordinating with other government agencies to identify and track the foreign vessel.

The couple said they wanted the vessel’s operator to be held liable for the damage on their boat and for income losses.  SFM