Filipinos in Washington, D.C. get set to vote in PH polls

Ambassador Jose L. Cuisia, Jr. (front) and members of the Filipino community sing the Philippine national anthem at the beginning of an educational forum on overseas voting. JON MELEGRITO PHOTOS

WASHINGTON, D.C. — Cheers and applause erupted in the Philippine Embassy’s Romulo Hall one recent evening during an educational forum on overseas voting, when First Secretary and Consul Katrina Borja-Martin verified from a computer list that, indeed, Agnes Yaptenco of Alexandria, Virginia was among 176,064 registered Filipino overseas voters in the United States.

Which means she can vote in the upcoming Philippine presidential elections.

A worried Yaptenco wasn’t sure if she was on the official list of registered voters, that’s why she came to the Embassy meeting that night. She just wanted assurance that she could cast her ballot. Her first.

A retired World Bank employee and a Virginia resident for 20 years, Yaptenco has been looking forward to this day after becoming a dual citizen two years ago.

“We owe it to our families over there to make choices that could make a difference in their lives,” she says. “And I intend to exercise this fundamental right.” 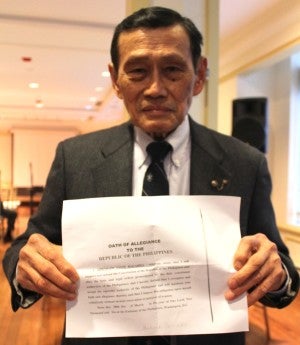 Dr. Abraham Bacarra shows proof that he is eligible to vote in the Philippine national elections.

Weeks before the October 31 deadline, she personally appeared as required at the Philippine Embassy’s Overseas voting registration office in Washington, D.C. In addition to completing a form, she submitted to a “live biometrics capture” by a Voter Registration Machine or VRM. It basically means providing a photograph, signature and fingerprint. And having reacquired her Philippine citizenship, she also needed to show a certified true copy of her signed “Oath of Allegiance.”

She did all that. Still, she wondered why she never received confirmation that her application was approved. She didn’t know she was supposed to regularly check the COMELEC website or call the Embassy.

She need not worry anymore. Her name is officially listed, projected on a large screen and viewed by dozens of equally concerned voters.

But until that moment, there was tension and suspense in the room as Consul Borja-Martin, a deputized COMELEC officer, and her assistant searched through computer files while an anxious audience waited with bated breath. Not finding her name would not only disappoint a first-time voter. It would raise doubts about the registration process and the reliability of the modified postal voting, automated election system, which will be used for the first time by overseas voters in the U.S.

The registration system worked, it turned out. No less than Philippine Ambassador to the United States Jose L. Cuisia, Jr., visibly pleased and delighted with the positive result, joined the forum attendees in expressing their relief. He had been raising questions himself while the Consul was giving a walkthrough of the voting process, from security safeguards to methods of transmitting election returns to COMELEC headquarters. 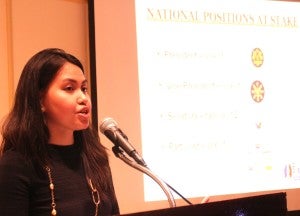 To further dispel any doubts, Borja-Martin invited the members of the voting public to observe the conduct of the elections, which will officially begin for overseas voters on April 9, 2016 and end on May 9, 2016.

But there were more questions raised during the open forum, particularly about what happens after ballots are cast, how they will be secured and counted. Judith Francia-Reyes, who has lived in the U.S. for 36 years and has been a dual citizen since 2009, specifically wanted to know if she would receive a receipt that she voted. She didn’t get one the first time she voted in 2010.

The answers apparently satisfied Francia-Reyes, a World Bank/IMF retiree, prompting her to remark: “I wish the transparency of the voting process here can be replicated in the Philippines.” The room once again erupted, this time in laughter.

Even the Ambassador had to admit there was no guarantee. “But there are adequate measures and mechanisms in place to ensure the process is smooth and transparent,” he pointed out. “I’m confident the COMELEC will do its job well.” 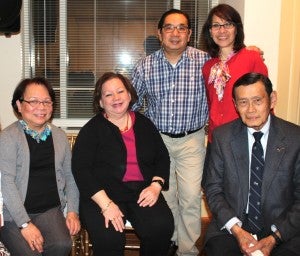 Among the overseas voters who have registered and are eligible to vote are, from left, Agnes Yaptenco, Judith Francia-Reyes, Wilson and Ellen Dee, Abraham Bacarra.

Ambassador Cuisia had requested each of them to speak of their campaign platform and priorities, their actual plans to engage the Filipino diaspora and harness its potential, and their programs for overseas Filipinos. Their taped comments addressed issues of law and order, corruption, education, economic development and poverty alleviation.

Binay’s absence, not having submitted his own message, did not bother Ferdie Gomez and Rudy Magsalin, both members of Alpha Phi Omega (APO). They don’t need to be convinced further, they said, about their fraternity brother’s competence and leadership.

“His excellent record as Mayor of Makati for 24 years speaks for itself,” Gomez says. “He helped improve the lives of many people.”

Abraham Bacarra of Bethesda, Maryland said the messages confirmed for him why he was voting for the Roxas-Robledo ticket. He voted for President Noynoy Aquino after becoming a dual citizen in 2006. Although he has lived in the U.S. for more than 50 years, he remains connected to the country of his birth by serving in medical missions every year. “I am very optimistic about the Philippines,” he says. “I want to help grow the economy and see my province of Abra prosper.” 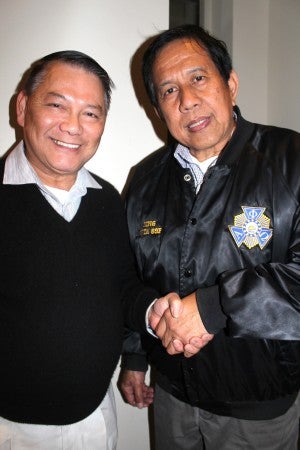 Rudy Magsalin and Ferdie Gomez are voting for Binay.

Ellen and Wilson Dee of Alexandria, Virginia were split in their choices. He’s for Binay, and she’s for Roxas. They both agreed that “Filipinos need help, especially the poor.” But they differed on who could best deliver on their promises.

Four days after the Embassy forum, with the first day of overseas voting seven days away, prominent entrepreneur and philanthropist Loida Nicolas Lewis flew in from New York to hold two pep rallies in Northern Virginia for the RoRo Team (Roxas and Robredo).

One was held at the Bistro 7107 and the other at Sweet City Dessert, a restaurant and pastry shop owned by Manny Tagle, brother of Cardinal Tagle.

It was another educational opportunity for the Filipino American community to know more about the state of the country and the state of mind of the candidates who want to be president.

But many of the 60 attendees who came to hear Lewis at both events already knew whose team they were in. The yellow T-shirts bearing the images of “Mar and Leni” sold out, at $20 each.

Focusing on the theme “Kung Walang Corrupt, Walang Mahirap” (If there’s no corruption, there’s no poverty), the national chair of U.S. Pinoys for Good Governance (USP4GG) said it would take 18 years to repair the damage Marcos inflicted on the country for two decades.

“President Aquino’s six years in office already paved the way. A President Roxas, followed by a President Robredo will accomplish the task in another 12 years,” she declared.

Using biblical terms, she said the Philippines endured 40 years in the desert, from the martial law years through the “corrupt reign” of Gloria Macapagal Arroyo. “It’s time for us to enter the promised land and, like Joshua, Mar and Leni will lead us,” she said. “The Philippines will become a top nation, I promise you that.”

After her talk, Richard Mercado, a student activist who witnessed the 1986 people power uprising that toppled Marcos, asked why Duterte was not a good choice for President. Lewis pointed out that crime was not the number one problem, but poverty. “We have been there before,” she reminded the audience. “We don’t need a strongman, but someone who will bring about swift justice. That’s what Mar will do.”

Mercado later posed for a photo with Lewis wearing a RoRo T-shirt.

It remains to be seen if voter turnout this time around will be better. In his remarks at the educational forum, Cuisia noted that in 2004, overseas voter turnout rate was at 65 percent, which, despite being comparable to national turnout, was lower than expected. 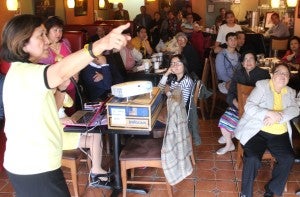 USP4GG National Chair Loida Nicolas Lewis says the “Daang Matuwid” of President Benigno Aquino must continue in order to uproot “the evils embedded in the Filipino soul” by the Marcos regime.

“However, this further deteriorated to a measly 16 percent in the 2007 midterm election, which did not involve a presidential contest. The presidential election in 2010 yielded a turnout rate of 25.99 percent, a far cry from the 65 percent rate six years before. It was a disturbing trend that prompted a congressional inquiry, multisectoral consultations, and finally, an amendment to the overseas voting law that removed the affidavit of return requirement, an extension of the registration period, and introduction of automated elections in selected voting stations.”

The ambassador further reminded the audience that it was the overseas Filipino community that “ignited” innovations to the overseas voting system “in order to encourage higher voter turnout and maintain the sanctity of the ballot.”

It was also overseas Filipinos who, concerned about “good governance,” initiated organized efforts to influence national leaders in the Philippines to be responsive to the people’s interests. Lewis, then national chair of the National Federation of Filipino American Associations (NaFFAA) in 2000, spearheaded efforts not only to simplify overseas voting procedure, but also to involve overseas Filipinos in Philippine political affairs.

In 1997, during the administration of President Fidel Ramos, community leaders formed Filipinos for Good Governance (FGG), as a way of bolstering Ramos’ commitment to run a clean and honest government.

“To this day, we remain ‘good governance’ monitors for the Philippines,” said community leader Mitzi Pickard, one of FGG’s founders and a leader in USP4GG. “We need to do all we can to help our motherland and our kababayans back home.”