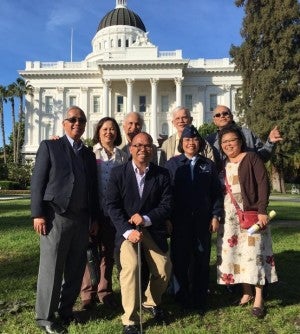 SAN FRANCISCO – The 17-person delegation that trooped to Sacramento recently to press for the inclusion of the role of Filipino soldiers in World War II in California’s school curriculum hoped to get good news. They were somewhat disappointed.

The delegation led by the Bataan Legacy Historical Society (BLHS) was ready to defend its prepared and submitted comments on the History-Social Science Framework Second Field Review Draft approved by the Instructional Quality Commission (IQC) on November 2015.

It planned to have its presence felt and its voice heard, especially as the 74th anniversary of the Fall of Bataan neared.

It turned out, however, that the scheduled discussion in Sacramento was only between the members of the History-Social Science Subject Matter Committee (SMC) chaired by Louis Bill Honig and the California History Social Sciences Project (CHSSP), which wrote the draft of the curriculum framework and made recommendations to the SMC and is headed by Nancy McTygue.

Suggested changes not taken up

As later recounted by BLHS Executive Director Cecilia Gaerlan, to California Appointments Secretary Mona Pasquil, the meeting “was a complex discussion of the recommended changes and there was not much deliberation by the committee and the CHSSP about the changes that we requested.”

Gaerlan reported though that “the Committee recommended two salient points:  that the phrase ‘American soldiers and their Filipino allies’ be changed to ‘American and Filipino soldiers of the U.S. Army’ and to include the word ‘strategic’ before the word ‘retreat’ in lines 705-706 as this was part of War Plan Orange 3.”

The BLHS educational steering committee had recommended seven changes, including the statement that “Despite suffering from massive diseases and starvation and fighting without any air support, the USAFFE troops performed a delaying action that disrupted the timetable of the Imperial Japanese Army of 52 days, defending Bataan for 99 days,” and that “on March 12, 1942, General MacArthur left the Philippines for Australia,” with the deletion that MacArthur uttered the words “I shall return” that they claim “does not add value to the framework and only continues to mystify General MacArthur.”

These recommendations were given letters of support by Mayor Ed Lee of San Francisco, Hydra Mendoza, Commissioner, San Francisco Board of Education, Fiona Ma, Chairwoman, State Board of Equalization and one of the sponsors of AB199, Philippine Consul General Henry Bensurto, Jr., Major General Antonio Taguba, Major General Eldon Regua, among other personalities, community leaders and organizations.

Gaerlan added that even as they had come to realize that the curriculum revision process was complex, they were “grateful to the Committee especially to IQC Exec. Director Tom Adams and to Bill Honig, the History Social Science Committee Chair, for exerting extraordinary efforts after the public comments to address our concerns, especially the two salient points I mentioned.”

She said further: “Much work lies ahead as we will not be privy to the final curriculum framework document that will be approved by the State Board of Education in May, so we need to double our efforts to ensure that it will be historically accurate and will reflect the perspective of those who sacrificed so much during WWII in the Philippines. Groups from other states are already looking at our process.  If we do this correctly, then California can lead the rest of the nation.”

Gaerlan also stressed that the BLHS needed to create the actual curriculum for the implementation of AB199 for what was discuss so far was just the curriculum framework or mere guidelines.

“The bill was just a starting point… The real test is whether history teachers will include the curriculum. The monumental task of developing the actual curriculum, introducing this to all school districts in California, training the teachers on how to teach this and finally teaching it to the students remain ahead of us,” Gaerlan explained.

“That is why the community must coalesce in order to get their school districts to adopt this. BLHS is in the initial stages of developing a curriculum template.”

Even as they are working on these, Gaerlan said the BLHS has not given up on getting all of its recommendations approved by the IQC before it makes the final document for the State Board of Equalization’s approval.

“I will speak about the efforts we are undertaking during the Philippine Scouts Heritage Society meeting in Las Vegas on April 23. Other states like New Mexico, Washington, Hawaii, among others, have inquired about the process that we are going through,” Gaerlan disclosed.