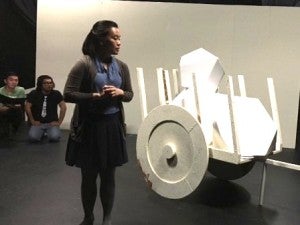 SAN FRANCISCO – Filipino-American theater group Bindlestiff Studio will stage “Tagalog: A Festival of One-Acts” this month, featuring three plays about love to be performed in Tagalog with English supertitles.

“Dalawang Gabi” (Two Evenings) by Maynard Manansala is a lighthearted comedy of impossible love between a college professor and her student, directed by Aureen Almario and Joe Cascasan.

“Hintayan ng Langit” (Heaven’s Waiting Room) reunites Lisa and Manolo, former lovers who’ve not seen and heard from each other in years, in an otherworldly location. Directed by Allan Manalo. The play is by poet Juan Miguel Severo, known for the viral Youtube video of his spoken word poem “Ang Huling Tula na Isusulat Ko Para Sa’yo” (The Last Poem That I Will Write for You).

In “Si Maria Isabella at ang Guryon ng mga Tala” (Maria Isabella and the Kite of Stars) by Eljay Castro Deldoc, based on Dean Francis Alfar’s “The Kite of Stars,” Maria wants to be a star in the sky to catch the attention of a young man. Along with a butcher’s assistant who is fond of her, she embarks on a 60-year adventure to gather all the materials needed to build a giant kite. Directed by Ramon Abad.

From Manila to San Francisco

The three plays are selected from the Virgin Labfest (VLF), an annual showcase of new one-act plays that has been held in Manila since 2004.

He translated his own play “Mga Gerilya ng Powell Street” into English for the group in 2014. (The play is based on the award-winning novel of the same title by San Francisco-based journalist and INQUIRER.net “Kuwento” columnist Benjamin Pimentel.) 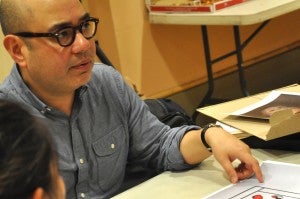 Will audiences in San Francisco relate to these plays from the Philippines? “Absolutely,” says Velasco.

She also notes that “there is a hunger from the audience to hear Tagalog spoken on stage.”

When Bindlestiff Studio mounted “A Pinoy Midsummer,” Velasco’s adaptation of William Shakespeare’s “A Midsummer Night’s Dream,” where some characters spoke in Tagalog, she “felt how the energy of the audience shifted, as if they sat up taller and leaned forward just to hear every single Tagalog word uttered.”

This observation inspired her to consider staging a production in Tagalog. “It’s a dream for a lot of Fil-Ams here in the states to have more exposure to our languages, whether it’s Tagalog, Ilocano, Kapampangan or Visayan…we miss it, we miss home.”

Nonetheless, the four directors involved want to ensure that the language used “will be accessible to everyone.”

Velasco explains, “We will try to find new ways to incorporate supertitles in a seamless way, not as a distraction but very much a part of the scene.”

In June, Bindlestiff Studio will offer a theater workshop on writing, acting and directing for the stage. The workshop will conclude in a recital production “Stories High,” scheduled for Aug. 7-Sept. 4.