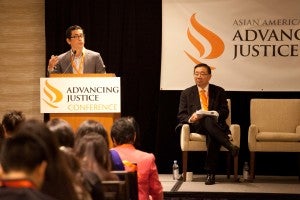 The AJ-LA project underscores the observation that Asian American voters have the potential to deliver the margin of victory in many local, state and federal elections. Asian Americans are the fastest growing racial group across the United States,

Conducted by telephone, the poll surveyed over 3,500 Asian American registered voters across the state, in English and six Asian languages: Chinese (Cantonese and Mandarin), Hindi, Japanese, Korean, Tagalog, and Vietnamese.

Speaking on the first day of the two-day national convention of Asian Americans, AJ-

president and executive director Stewart Kwoh said, “in this election cycle, where every vote will count, Asian American voters should not be ignored or taken for granted.” 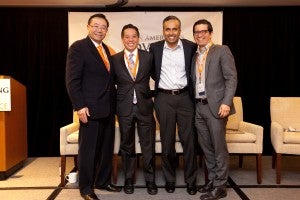 Billed as “Empowering Asian American and Pacific Islander Communities, 2016 and Beyond,” the conference was attended by more than 850 students, educators, professionals, legislative and policy makers in California.

With regards to issues important to Asian Americans, Kwoh said that the study shows, “Our community supports those who do the right thing for their families on key issues like education, health care reform, and immigration.”

On health care: Some 76% of those surveyed that included Democrats and Republicans think the “Affordable Care Act” is good for America.

On Immigration Reform, 65% support a path to legalization for the undocumented.

On Education: 80% Democrats, Republicans and those with “No Party affiliations” are almost evenly distributed among those who support giving priority to students who are low-income, limited-English speaking, or foster youth.

Of those who support an increase in enrollment, 67% would be willing to pay more in taxes to achieve it, including 80% of Democrats, 68% of the unaffiliated voters, and 62% of Republicans.

Ichinose also reported that there are 25 legislative districts in which Asian Americans make up 25% or more of the electorate. This is based on the California Secretary of State’s Office’s Statewide Voter File (April 8, 2013). These include the congressional districts, State Senate districts and State Assembly districts of Santa Clara/Alameda, Los Angeles (San Gabriel Valley), San Francisco, San Mateo, Orange (Los Angeles).

Ichinose said there were 38 legislative districts in which Asian American voter registration exceeded the margin of victory.