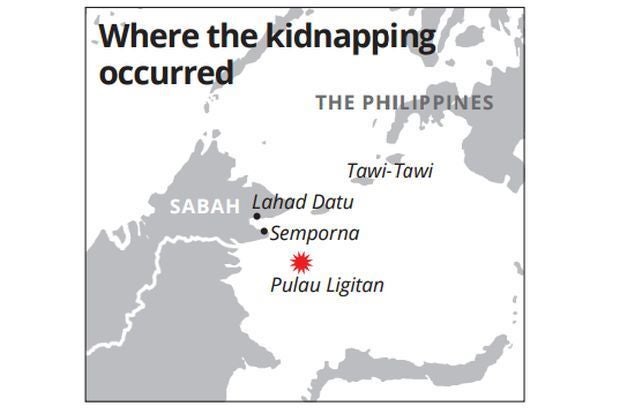 LAHAD DATU — A barge, believed to be pulled by Indonesian registered tugboat Brahma 12, was found floating in waters off Lahad Datu on Sunday after 10 crew members were abducted by Abu Sayyaf on March 26.

The barge, Anand 12, was found drifting in the waters off Tungku about 100kms from the east coast town of Lahad Datu by Malaysian Maritime Enforcement Agency (MMEA) patrol boats on Sunday.

Sandakan MMEA director Capt A. Razak Abd Rahman said they believe that the barge had drifted into Malaysian waters.

Brahma 12 was found drifting in the Tawi Tawi islands close to Sabah’s east coast border waters on March 29 after all the Indonesian crew members were reported missing. Abu Sayyaf gunmen in Jolo are demanding P50 million for their freedom.

Razak said they received information about the drifting tugboat at about 1pm on Sunday and immediately dispatched their patrols–Kilat 51 and Banggi 35–to the area.

He said the barge could have drifted through the Alice Channel in the Philippine sea border with Semporna and drifted into Malaysian waters.

Razak said the barge, still laden with coal, was towed back to jetty Fordeco in Lahad Datu for further investigation.

He said the operations were carried out through the integrated assistance of various agencies under Eastern Sabah Security Command (Esscom).

Five other crew members–two Indonesians and three Myanmar nationals–were let off and being questioned by Malaysian police in Tawau.

Read Next
US defense chief to visit PH amid tension over South China Sea
EDITORS' PICK
Cherry Mobile teams up with Cloud Panda PH, launches online store
Someone from the Philippines can become $356 Million richer this Tuesday
Philippines’ COVID-19 cases accelerate to 18,638
Duterte certifies as urgent anti-terror bill
Leveling up your ‘lutong bahay’ with the kitchen companion you never knew you needed
‘Puno na lahat:’ Metro workers brave lack of public transport, rains on Day 1 of GCQ
MOST READ
‘If I had not been SolGen, I will make you eat your words,’ Calida tells Coco Martin
51 percent of German firms holding back investments in PH, but not because of COVID-19
Duterte certifies as urgent anti-terror bill
5 car dealership outlets shutting down
Don't miss out on the latest news and information.