globalnation /
A FILIPINA IN THE WARZONE

‘I screamed in terror’ when US bombs fell on my hospital 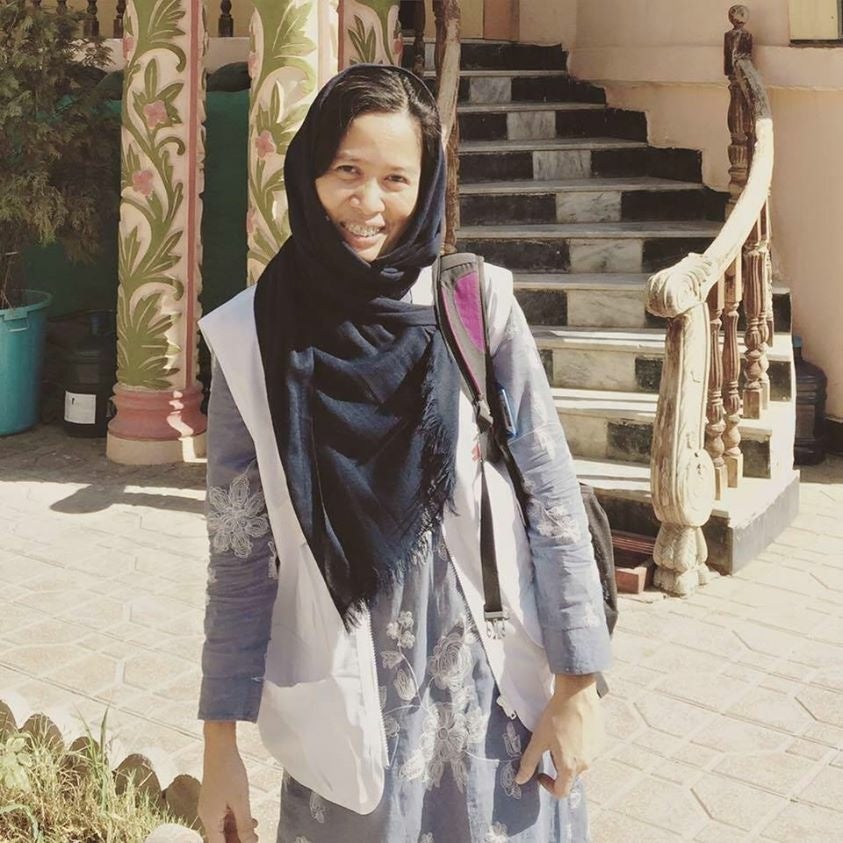 On October 3, 2015, a hospital run by Medecins Sans Frontieres (Doctors without Borders, or MSF) in Kunduz, Afghanistan was struck repeatedly by US military aircraft. Even after urgent calls to US officials, the bombing run continued. The casualty in the mistaken dawn assault: 42 dead, including 24 patients, 14 staff, and 4 caretakers. Dr. Evangeline Cua, a Filipino field surgeon with MSF, survived the horrifying ordeal. Six months to the day the bombs unaccountably started falling, she tells her story.

We were like headless chickens running in total darkness—I and the surgeon who assisted me in an operation. The nurses who were with us a moment ago had run outside the building, braving the volley of gunshots coming from above. I was coughing, half-choked by dust swirling around the area. Behind my surgical mask, my mouth was gritty as if somebody had forced me to eat sand. I could hear my breath rasping in and out. Layers of smoke coming from a nearby room made it hard to see where we were. Blinking, I caught sight of a glow, from a man’s hand holding a phone. He seemed mortally wounded but was still trying to send a message … perhaps to a loved one? I stood transfixed, choked, not knowing where to turn or what to do while all around us, the bombing continued at regular intervals, shaking the ground, sending debris sweeping and flying. One. Two. Three. I tried to count but there seemed to be no end to the explosions. I stopped counting at eight and silently prayed that we could get out of there alive.

Fire licked at the roof of one end of the building, dancing and sparkling in the dark, reaching toward the branches of the trees nearby. The ICU was burning. We decided that we had to go the other way, toward what had been the lobby of the hospital, where we could see a faint gleam of light. Taking a deep breath, we headed in that direction, debris crackling loudly under our feet as we stepped on them. Loose debris continued to fall down on us. One could tell that a tremendous force of some sort had blown through the room; wires were hanging from the ceiling, mounds of debris – broken glass, wood, paper, cement, plastic, shreds and chunks of God-knows-what – were everywhere.

F*ck! The word came unbidden to my mouth. We had not made it very far when I tripped and fell down on something soft. A dead human body…or bodies! Oh, dear God! Stifling a scream and fearing the worst, I slowly got up. There was a sticky wetness on the front of my operating room gown and my gloved hand. Hurriedly examining myself, I found a big gash on my right knee. Tiny pieces of glass, which could have seriously cut me, were clinging to the surface of my OT gown. I ached all over. No major injuries though. Good.

Walking slowly now, we decided to crouch near a wall in the only lighted area and waited for the bombing to stop. The silence inside was unnerving. Eerie. Everything was askew – the door was on the floor, a wheelchair was in the middle of the hall, papers were everywhere. Outside, only the constant humming from above pointed to the presence of something. An aircraft? Airstrike? Why the hospital? Why us? Then, without warning, another tremendous, earsplitting blast shook the building. The ceiling came crashing down on us and the last remaining lights were turned off, sending us into total darkness. I screamed in terror as wires pinned me to the ground. That was the last thing I remembered.

I woke up sobbing and disoriented. It had been three months since I went home from Afghanistan and, except for a fading scar on my right knee, that awful incident at the Kunduz Trauma Center was almost forgotten, suppressed in memory. Debriefings, consultations with psychiatrists, meditation techniques, pages upon pages of journal entries to unload myself of the horror of that night … all of these were swept aside when memories came rushing back in a nightmare triggered by fireworks. The acrid smell of smoke, the burning bodies and hair, the smell of fresh blood mixed with hospital cleaning agents and the terror I felt that night became so real again that I had to resist the urge to panic, to run, to seek shelter. Reminding myself that I was home now, I was safe, and nobody could hurt me, I started questioning myself why I was in the hospital on that awful night.

I was 12 and in grade school when I read a famous woman surgeon’s biography. I dreamed of becoming a surgeon ever since. I was going to wear a scrub suit and, with a scalpel in my hand, make a difference in other people’s lives. The desire to work in a war zone came later, but it was prominent on my bucket list. I felt like I won the lottery when I got accepted by Médecins Sans Frontières as a field surgeon. Doctors Without Borders! Finally! Despite the reminders and warnings from well-meaning friends and relatives about the dangers of working in a conflict zone, I eagerly prepared for my first mission.

In a 100-bed trauma center in a war zone, I was expecting to be inundated with patients, operating day in and day out, to be so exhausted to the core that all I could do was crawl to my bed and fall into a deep slumber each night. I wanted to do complicated cases. Bomb blast. Gunshot. Cases I have only read in textbooks.

But I felt useless in my first few weeks in Kunduz. Except for the occasional liver injury sustained during motor vehicular accidents and some elective general surgeries, the majority of cases I encountered involved bones and fractures — something I had very minimal knowledge about. And there were eight national staff — orthopedic surgeons —who were so adept at what they were doing that I began questioning myself if I was of any use there at all. I was bored. I wanted to operate on patients. I wanted to do more. It was the sole reason I was there, after all. But I was in for a disappointment.

With only two weeks left before the end of my mission, I accepted the reality: Except for the ward rounds, the morning meetings and the occasional stab wounds and blunt abdominal trauma, my life in Kunduz was one boring routine.

Until the war began. JN

Dr. Evangeline Cua is a surgeon from Iloilo, the Philippines. She works for Doctors Without Borders (MSF) and was at the scene during the October 2015 Kunduz Trauma Hospital bombing. Dr. Cua is due to return to Afghanistan to work in a maternal health care project of the MSF.