The warships JS Ariake and JS Setogiri and the submarine JS Oyashio will not join the war games but will participate in a series of confidence building activities between newly commissioned personnel of the Japan Maritime Self-Defense Force (JMSDF) and their Filipino counterparts.

“We came here to train our newly commissioned navy personnel. It is a very brief visit but we are looking forward to having a great time,” Yoshino said.

He said they would participate in some exercises at sea with Philippine Navy personnel. He declined to provide more details, citing security reasons.

Felix said the NETC had prepared some activities for the visitors, including a sports festival and a tour of local training facilities.

Yoshino said their visit had nothing to do with the tensions between the Philippines and China in the South China Sea.

“We are here to train… we are not sending any message to any country,” he said.

Yoshino said he was hoping for more regular maritime exercises between Japan and the Philippines, a country he described as a “very important partner of the JMSDF.”

The Japanese sailors, Yoshino said, would be granted liberty, which they could enjoy outside the free port.

“Our crew members are looking forward to enjoying the culture of Filipinos. They will visit some tourist spots and historical places,” Yoshino said.

Although Japan is participating as an observer, this group of Japanese sailors will not be part of the war games, Felix said.

Manila is seeking to strengthen ties with Tokyo as tensions mount over the disputed sea, almost all of which is being claimed by China. 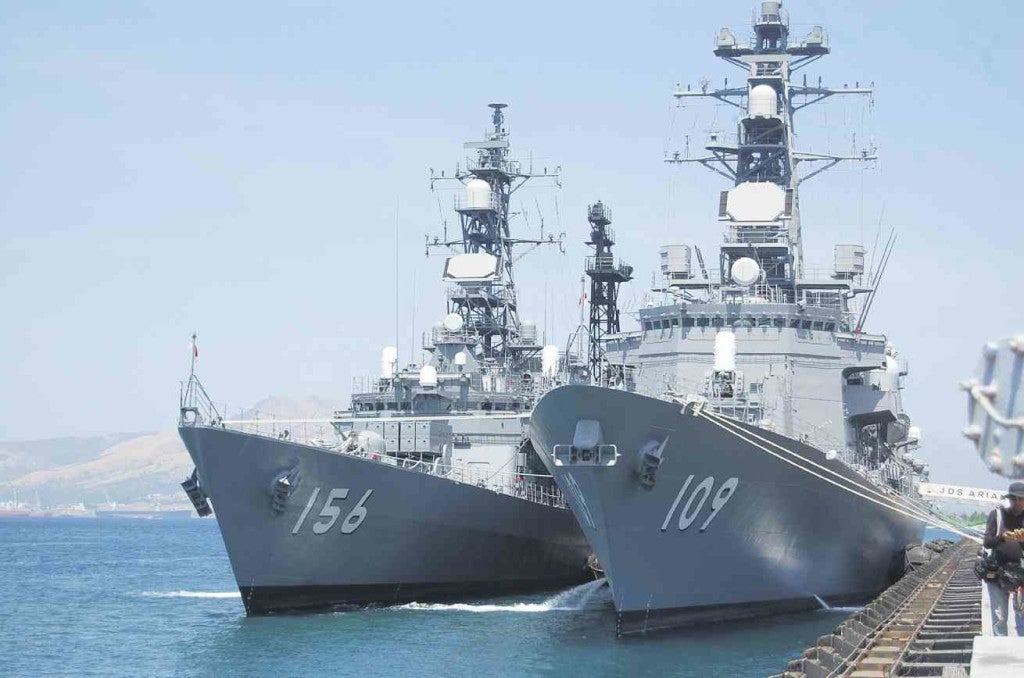 GOODWILL VISIT Two Japanese warships, the JS Ariake and the JS Setogiri, are berthed alongside a submarine, the JS Oyashio, at Alava Pier inside Subic Bay Freeport Zone. The vessels, carrying more than 400 crew, are here for a goodwill visit. ALLAN MACATUNO / INQUIRER CENTRAL LUZON

Subic, a sprawling former US naval base, is  just 200 kilometers  from the contested Scarborough Shoal, a Chinese-held shoal.

“The visit is a manifestation of a sustained promotion of regional peace and stability and enhancement of maritime cooperation between neighboring navies,” Philippine Navy spokesperson Commander Lued Lincuna said.

Seriously outgunned by its much larger rival China, the Philippines has turned to allies like the United States and Japan to upgrade its armed forces in recent years.

In February, Japan agreed to supply the Philippines with military hardware, which may include anti-submarine reconnaissance aircraft and radar technology.

Aside from the Philippines, Vietnam, Brunei, Malaysia and Taiwan also have overlapping claims. With an AFP report