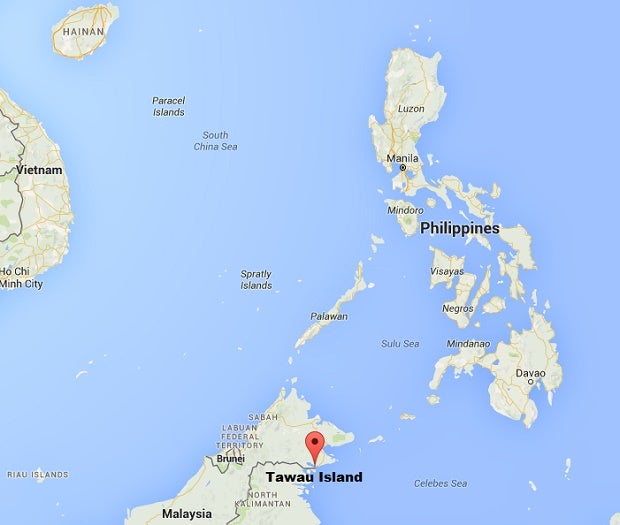 The map shows Tawau Island on Sabah which was the supposed destination of the boat MV Massive 6, where 4 Malaysians were reportedly seized by suspected Abu Sayyaf gunmen on Friday night. GOOGLE MAP SCREENGRAB

Eight gunmen on board a speed boat took the Malaysians from the MV Massive 6 Friday night but left behind five other crewmen from Myanmar and Indonesia as the tugboat sailed to Tawau island in Malaysia’s eastern state of Sabah from the Philippines, Malaysian officials said.

The tugboat owner managed to establish contact with the remaining crewmen, who reported that they had been robbed and that four Malaysian colleagues had been kidnapped. The tugboat continued its voyage to Tawau with a security vessel escorting it after the attack, the officials said.

Philippine military officials said they had received sketchy reports about the new kidnappings and added that Philippine authorities were coordinating with their Malaysian counterparts.

Philippine forces “remain on alert and have taken appropriate action to address the situation,” said Maj. Filemon Tan, who speaks for the military command in charge of securing southern provinces where Abu Sayyaf militants have an active presence.

Ten Indonesian crewmen of a tugboat and barge were kidnapped recently by suspected Abu Sayyaf militants while en route to the Philippines from Indonesia’s Kalimantan region, Indonesian and Philippine officials said.

The Indonesian foreign ministry said the owner of the hijacked tug boat and coal barge has received two telephone calls, purportedly from the Abu Sayyaf, demanding a ransom.

Following Friday’s attack, Royal Malaysian Navy ships and forces have been ordered to step up security and increase vigilance due to what appears to be a new tactic by the kidnappers, Malaysian officials said.

Abu Sayyaf gunmen from the southern Philippines have previously assaulted and staged kidnappings in Malaysia’s coastal resorts in Sabah.

The two latest kidnappings targeted slow-moving tugboats that were relatively easy to board in the Sulu Sea, Malaysian officials said.

Abu Sayyaf, which is on U.S. and Philippine lists of terrorist organizations, is notorious for bombings, extortions and kidnappings for ransom in the volatile south of the Philippines. It has been weakened by years of U.S.-backed Philippine offensives, but remains a security threat.