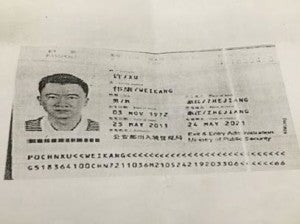 This is a photocopy of Weikang Xu’s passport. Xu is being investigated for the cyber-heist of $81 million from the Bangladesh central bank and the laundering of the money in a Philippine bank, RCBC. Photo obtained by Nancy Carvajal, INQUIRER

MANILA — Philippine authorities have obtained a copy of the Chinese passport of Weikang Xu — a man believed to have received P600 million and $18 million in cash, out of the $81 million stolen from the Bangladesh central bank and then laundered in the country.

The dollars were converted into pesos by a remittance company called Philrem, as confirmed by its president Salud Bautista, and then transmitted in various tranches to the bank accounts of Xu, Eastern Hawaii Leisure Co. and Bloomberry Hotels Inc. (Solaire Resorts).

Sources at the casino said that even after news on the scam first broke out in the Philippine Daily Inquirer, Xu — first identified as a Chinese junket operator, but later on corrected by Solaire as a “mere gambler” — was still gambling in the casino along Roxas Boulevard.

A source said Xu, however, was barred from entering and playing in the popular casino on the orders of the Solaire management, after the hotel bank accounts were frozen by the Anti- Money Laundering Council (AMLC).

The AMLC filed charges against Xu and Kim Wong, a junket operator, in connection with the $81-million money laundering scheme before the Department of Justice.

Sen. Serge Osmeña said that Wong might be a “major player” in the money laundering scandal.

Osmeña had asked the National Bureau of Investigation to look for Xu.

Philrem held briefly the $81 million, which was first deposited in four bank accounts at the RCBC branch on Jupiter Street onFeb. 5, the same day hackers stole the money from the Bangladesh central bank’s account at the Federal Reserve Bank in New York.  SFM