Filipina in California not guilty of kidnapping own daughter 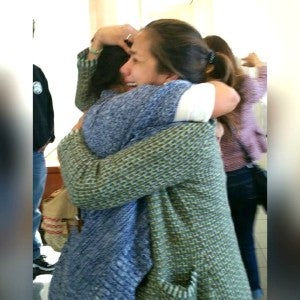 Nichole and mother Anna Nepomuceno in a tight embrace outside the courtroom after the verdict was read. MIGRANTE NORCAL

NAPA, California — A Filipina mother charged with child abduction and kidnapping her own daughter in Napa County, California had her hope for a better life revived when a 12-person jury found her not guilty of all the charges.

Makati resident Anna Nepomuceno looked greatly relieved and teary-eyed as she turned to her lawyer, Stacy Barrett, after the verdict was announced, then hugged her family and supporters and thanked them profusely.

“The mood at the courtroom was very intense as we were also uneasy and nervous,” said Faye Lacanilao of Filipino Community Center worker’s rights program and Migrante NorCal. “When the verdict was announced, all of us found ourselves crying. We joined hands and hugged each other. Before that we were all praying and trying to console each other.” 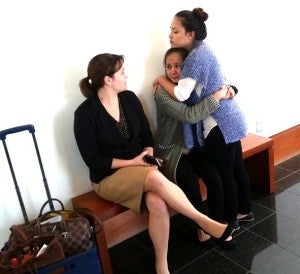 Barrett also looked relieved, overwhelmed with feelings and seemed to be trying to hold back tears although she was heard saying that the verdict had not really sunk in yet.

“The support shown by the Filipino community helped her case and uplifted her and my spirit. I have been practicing for ten years and I can say that this was the first time I’ve had protesters supporting my client. So I am grateful for this support and I know Anna is as well,” Barrett stated.

According to the timeline provided for the case, Anna’s plight began in March 2012 when her erstwhile husband, Jeremy Faust, started showing signs of having lewd intentions on her younger daughter, M, as after Anna reportedly saw Faust’s hand moving around M’s sensitive part.

Her suspicion was bolstered after she learned in 2013 that Faust had been giving then 16-year-old Nichole unwanted massages since September 2012 when Anna wasn’t home and especially when she was on business trips. In January 2013 Faust allegedly started putting his hand under Nicole’s shirt as the massages became intimate. Faust allegedly even asked Nichole not to tell Anna of the massages so Nichole “wouldn’t get into trouble.” Anna also caught Faust looking at Nichole’s posterior. 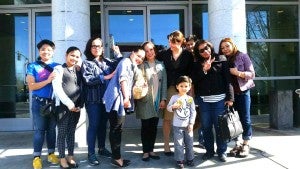 Anna and Nichole reported the alleged molestation to the American Canyon Police Department, leading to Judge Rodney Stone to grant a move out order against Faust and an emergency protection order (EPO) prohibiting him from having any contact with Anna and Nichole, aside from younger daughter M.

Anna then filed for divorce in March 2013 the succeeding summons of which accompanied an automatic restraining order (ARO) prohibiting either parent from leaving the state with M without the other parent’s permission. It was not clear whether Anna actually ever saw the ARO.

In August 2013, the Napa Sherriff Office (NSO) recommended charges against Faust for violations of Penal Code on annoying or molesting a child under age 18 with respect to Nichole, and lascivious acts on a child under the age of 14 for M. But these were rejected by the Napa District Attorney’s Office (DA) in September 2013 for lack of sufficient evidence.

While the divorce case was ongoing, on July 25, 2014, Anna flew to the Philippines with M from SFO to visit Anna’s ailing father. Both mother and daughter had round trip tickets with a return date of August 25, 2014.

Her family lawyer dropped her, citing irreconcilable differences, after Anna informed her she was in the Philippines. In Anna’s absence and without a lawyer to represent her, family court Judge Elia Ortiz granted full legal and physical custody of M to Faust and ordered Anna to return M to Napa County.

Anna and M failed to return to San Francisco on August 25, 2014. She was able to obtain a permanent restraining order on February 10, 2015 protecting Anna and M from Faust at the Philippines Regional Trial Court. Judge Ortiz granted dissolution of of Anna’s marriage to Faust on December 12, 2014 in Anna’s absence.

Anna returned by herself to San Francisco on a February 27, 2015 flight from Manila; she was arrested at SFO airport. She was taken to San Mateo County Jail in Redwood City then transferred to Napa County Department of Corrections

The Napa Public Defender’s Office was appointed to represent Anna through then-Deputy Public Defender Stacy Barrett. Anna posted a $100,000 with the help of friends of her family and was released from the Napa County Department of Corrections (NCDC) on March 12, 2015.

Anna Nepomuceno and Stacy Barrett outside the courthouse before the start of trial. JUN NUCUM

Quate’s motion to amend the charge was granted, and Anna was found not guilty of by the jury before Judge Francisca Tisher in a trial that started February 22, 2016.

“We were ready to accept a mistrial outcome as we felt the jurors were taking a long time deciding on a verdict. We were then surprised that there was a unanimous decision that even some of the jurors waited for Anna to come out and hug her,” Lacanilao added.

“We are really happy that justice prevailed, that Anna would be reunited with M and we hope that this will no longer happen to any Filipino mother like her,” Lacanilao declared.

Several members of Gabriela US came to show support for Nepomuceno.