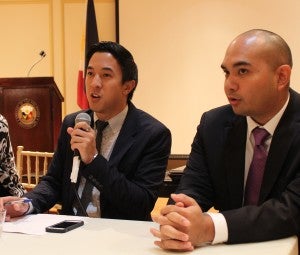 WASHINGTON, D.C. — With potential gains strongest among Asian American young adults, the Clinton campaign is making sure it’s fully engaged in the next eight months with Asian American Pacific Islander (AAPI) voters by naming an Asian American under 30 in its top leadership.

Enter 27-year-old Filipino American Jason Tengco, who on April 3 will assume a key post as AAPI outreach director, the liaison between the Hillary for America campaign and the increasingly important AAPI electorate, which has demonstrated its potential for swinging an election in close contests.

Tengco is replacing Lisa Changadveja, a young Thai American appointed last August, who is taking on another job.

“Jason is passionate about engaging AAPIs in the political process, building a pipeline for youth empowerment, and ensuring that the AAPI community’s diverse issues are heard and addressed,” reads a statement from the campaign.

AAPI voters, whose numbers are expected to double by 2040 and rise to 12.2 million, have played a key role in the last two presidential elections. More than 70 percent voted for President Obama when he first ran in 2008. He was the overwhelming choice again when he ran for reelection four years later. 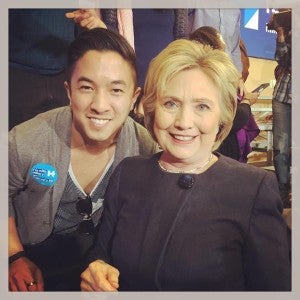 Jason Tengco poses with Hillary Clinton during a pause in a canvassing drive in Las Vegas last February, a week before the Nevada caucuses. CONTRIBUTED

Ignored by politicians for 10 years ago, AAPI voters are now being courted heavily by both Democratic and Republican parties. After all, AAPIs are the fastest growing population in the United States today, having outpaced Hispanic growth in 2012.

“These are the voters who—with voter education and attention to key issues—can gain the most from a significant push on voter outreach and mobilization,” notes a study by APIA Vote, a national voter education and mobilization project. The study also finds that AAPI voters tend to favor Democrats, notably on key issues such as immigration, health care and income inequality.

“It’s hard to imagine a more stark contrast in the choices we will face in this election,” says Chris Lu, a veteran Democratic activist. “It’s also hard to imagine a time when the AAPI community will play a significant role in choosing the next president. And it’s hard to imagine someone better than Jason who can elevate the importance of AAPIs in this campaign.” 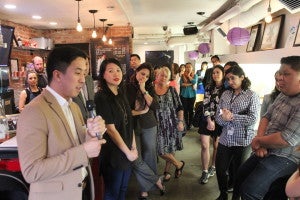 At a farewell reception tendered by friends and colleagues in the White House Initiative on Asian American Pacific Islanders (WHIAAPI), Jason Tengco spoke about his grandfather, a Filipino World War II veteran, who inspired him to pursue public service. PHOTO BY JON MELEGRITO

Lu was among a handful of top Obama administration officials who spoke in their personal capacity in praise of Tengco during a farewell reception in his honor, held recently at the Purple Patch, a Filipino American-owned restaurant in the nation’s capital.

Francey Lim Youngberg, who worked with Tengco at the White House Initiative on Asian American Pacific Islanders (WHIAAPI), also commended him for his ability “to maintain a good balance in reaching out to people of all ages. As a young person, he relates very well to his peers, but he also has a history of being respectful to his elders.”

“The Clintons have had a long standing commitment to our community,” adds Youngberg, who once served as executive director of the Asian Pacific American Institute for Congressional Studies (APAICS). “It was Bill Clinton who put together the White House Initiative and I know that Hillary will continue to make AAPIs an important focus under her administration.”

Filipino Americans who had assumed high positions during the Clinton presidency include Maria Mabilangan Haley and Irene Bueno, who also served as AAPI outreach director for the first Hillary campaign.

During Obama’s run for the presidency, Filipino Americans who played significant roles on the national level as voter outreach directors include Charmaine Manansala and Naomi Tacuyan Underwood. Both are co-founders of KAYA: Filipino Americans for Progress.

In a statement applauding Tengco’s new role, KAYA noted that “Through Jason’s appointment, Hillary for America continues to demonstrate its recognition of the growing influence of the Asian American vote. Particularly, Jason’s leadership in the Filipino American community will be pivotal in rallying the communities in battleground states such as Nevada, Virginia, North Carolina and Florida on behalf of progressive candidates in November.” 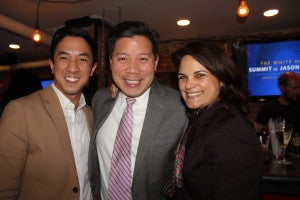 Jason Tengco, Chris Lu and Nani Coloretti are among the top AAPI officials in the Obama administration. Lu and Coloretti spoke in their personal capacity as Jason’s friends. PHOTO BY JON MELEGRITO

“The Filipino American community has made great strides in the political arena,” observes Ben de Guzman, a civil rights activist. “For the longest time, we didn’t have too many Filipino Americans in the White House. Jason’s leadership is part of our community’s emergence.”

From intern to deputy director

Born and raised in San Francisco and a UCLA political science graduate, Tengco has had an impressive string of public service positions. In 2010, he started out as a White House intern, then rose to become Deputy Director of the White House Initiative on Asian American Pacific Islanders (WHIAAPI) in five years.

In between, he served as Outreach Fellow for the Asian Pacific American Labor Alliance (APALA) where he helped organize APALA’s largest national convention in history, coordinated outreach to young leaders throughout the nation, and launched the Generations United Mentorship program.

In 2014, Tengco was among 10 delegates selected to participate in the Philippine Embassy’s Filipino American Youth Leadership Program (FYLPro), a weeklong immersion in the Philippines. FYLPro started in 2012 to develop strategies that address key advocacies and legacy projects that promote development of the Filipino community in the U.S. and the Philippines.

“The issue that inspired me and really drove me to do what I’m doing today is the Filipino World War II veterans’ struggle for justice,” Tengco, whose grandfather is a veteran, said during the reception. “But when I learned that Congress singled them out and told them their service didn’t count, it opened my eyes. Doing organizing around this issue and other issues that our community care about really changed my life.” 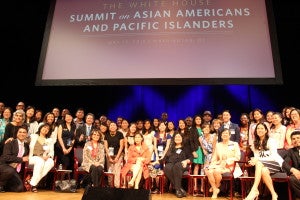 He also shared openly for the first time the lowest moment in his life when his older brother committed suicide five years ago. “I like to think my brother had something to do with my work in the White House. He helped me relive my dream and I’m thankful to the community for those incredible four years.”

This is “definitely not a farewell,” he pointed out, “but a see you later.”

The 60 or so friends and colleagues who gathered to wish him well all knew what it meant, and what is required of them to make it happen.

Read Next
Waiting for the other shoe(s) to drop
EDITORS' PICK
Latest patient brings number of COVID-19 cases in Cebu to 29
Anne Curtis, Angel Locsin, and Gabbi Garcia: Celebrity tweets on the state of the nation
Senators on Duterte ‘shoot’ warning: ‘Let’s address hunger’ instead
Vico Sotto replies to NBI, asks for clarification
DOLE Bicol shells out P45.7M in aid for 9,000 displaced workers
Macalintal: NBI on ‘fishing expedition’ as no ‘genuine’ case vs Vico
MOST READ
Angelica Panganiban on endorsing Duterte in 2016: ‘Patawarin niyo ko’
PACC to NBI: Probe Robredo for ‘competing with national govt’ in fight vs COVID-19
PACC’s COVID-19 motto? ‘Lahat ng tutulong, ikukulong’ — Lacson
5 Filipinos on Forbes Asia’s “30 Under 30” roster
Don't miss out on the latest news and information.