Waiting for the other shoe(s) to drop 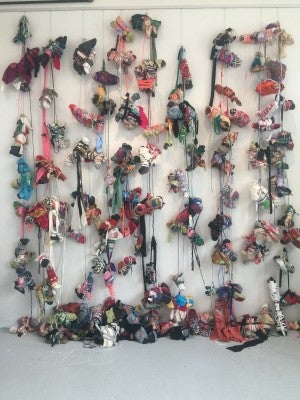 Husband and wife curators and co-founders of Topaz Arts, Todd Richmond and Paz Tanjuaquio say they “have long been inspired by Joseph Cornell, an American artist who lived most of his life on Utopia Parkway in Queens, where he created his renowned works that influenced the genre of assemblage and collage.” In addition to Merino, the exhibition includes assemblages by Junko Yamada, Roger Rothstein, Orange, and Joseph Paul Fox.

I asked Merino about the genesis of his work. He said it was his artistic response to the ubiquitous association of the Philippines with shoes accumulated by that indefatigable though seemingly clueless half of a conjugal dictatorship, Imelda Marcos.

As a power second only to her husband, the late, unlamented Ferdinand, Imelda wore many hats—and many, many more shoes. Or at least, she could have, for we don’t really know if she did wear each pair even if only once. Like most compulsive shoppers she purchased more than she needed in order to fill the hole in her psyche that undoubtedly was, to use Senator Bernie Sanders’s word, “yuge”!

Ged recalls seeing the collection in Malacañang after the People Power uprising. He and his mentor the late printmaker Manuel Rodriguez, Jr. were taken by a friend to the Palace. Ged shakes his head. “I remember the shoe collection, behind a glass case rows and rows of those infamous 3,000 shoes. It made such an impact on me. The waste (I heard she only wore them once) and the millions of people in poverty!”

He wanted to turn that popular image on its head. As of now Merino has 500 pairs donated by friends and acquaintances. It began with his Union High School of Manila class of 1976 reunion when his classmates dedicated a day to wrapping shoes. “Collecting 3,000 to match the infamous Imelda collection was the original idea.” He hadn’t thought much about attaining this goal since he started but he has since been encouraged by the positive response to his installation. 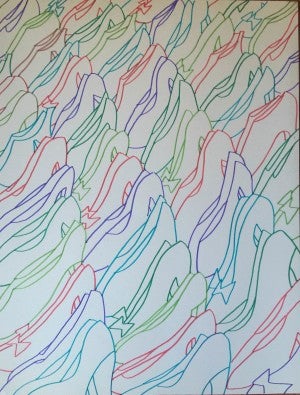 Once the exhibition is over—not just in Queens but an upcoming one at the Drawing Room Contemporary Art in Metro Manila, opening on July 16—the shoes will then be turned over to nonprofit groups, principally based in the city of Tacloban, working with Typhoon Haiyan victims. . All the shoes are wearable, and will be worn, not just once, but as long as they last. I was one of those who donated, in my case a pair of high-top basketball sneakers. I hope some basketball-crazy kid gets to wear them.

In an email, Ged recalls telling his wife, Carolina, an artist from Colombia, about Imelda’s shoes. Then she “showed me her graphic arts project from 30 years ago. It’s about The Shoes. She remembers thinking of the absurdity of Imelda’s collection.”

Imagining herself as some kind of czarina Imelda treated the country as footwear, to be trod upon mercilessly, hoping to bring her compatriots to heel. Instead in 1986 the nation arose and in an inspired fury and flurry of steps kicked her and the rest of the Marcoses out.

Alas, like a bad centavo turning up, not only is she back she has regained some of her power. And with her son, Ferdinand “Bongbong” Jr., possibly winning the vice-presidency this coming May, the unspoken hope of the mother and the rest of the Marcos clan is that he will step into the shoes of his father. That scenario may indeed happen were the next president to die with Bongbong as the VP, and thus the successor.

I don’t necessarily think the son should be held responsible for the sins of the father. However, when the son portrays the brutal regime of his father as a golden period in the life of the nation, with unparalleled achievements, then clearly he is running on his father’s record. To elect him to the vice-presidency would be a serious misstep. I would hope the voters reject such a distortion of history and instead show him, Imelda, and their ilk the back of our shoes.