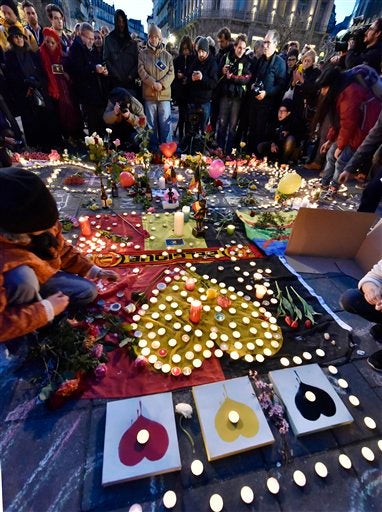 People put candles on painted hearts with the Belgian colors to mourn for the victims at the place de la Bourse in the center of Brussels, Tuesday, March 22, 2016. Bombs exploded at the Brussels airport and one of the city’s metro stations Tuesday, killing and wounding scores of people, as a European capital was again locked down amid heightened security threats. AP

(It was like a calm sea struck by a tsunami.)

This was how Belgium-based Filipino journalist Arlene Andres described the Zaventum airport before the blasts that members of the Islamist State group claimed to have set up.  It what appeared a well-coordinated attack, there was also a bombing at Maalbeek, a metro station near the European Union buildings.

“It’s Easter Week and we could have been celebrating the holidays,” ” she said on Tuesday late afternoon, in an interview with Radyo Inquirer’s anchor  Den Macaranas.

“The bombings happened during morning rush hours. It’s 10 minutes to 8 a.m. here so many are just going to their offices,” she said. She added there are Filipinos working at the airport and many may have just clocked in at their respective workplaces.

She said the airport is full of police, security personnel and armored car “but very open.”

As of posting, she said there were no reported OFWs injured or had perished in the bombing.

“All Filipinos are safe in Brussels, so far, ” she assured. The Philippine embassy in Brussels, however, advised OFWs to exercise extreme caution as the country is in Alert Level 4.

As of Tuesday night, the terror attack has claimed 34 lives and injured 170. TVJ

34 killed in 3 terror attacks in Brussels