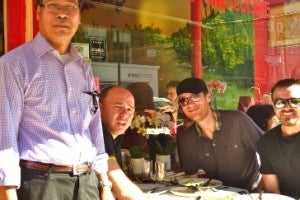 After passing through the gravel-strewn driveway, Eddie Poniente, owner of the establishment, gives me a warm welcome.

Poniente tells me that he is staying at his resort on a brief visit from London, where he has been based for the past 30 years running a restaurant with his wife and business partner, Josephine Poniente.

After migrating to England in September 1975, the couple successfully established Josephine’s Filipino Restaurant, one of the UK’s first and most well known Filipino eateries.

Josephine’s Restaurant, located centrally in London’s bustling Charlotte Street, has been serving Londoners Philippine cuisine since 1996. This coming September, the restaurant will have been open for over 20 years – a commendable achievement.

“It’s been very interesting seeing how things have developed,” Poniente says, with regards to the restaurant’s clientele. “Really, our customers have been about twenty percent Filipino, eighty percent foreign. British people really love the food.”

With a vibrant menu encompassing dishes from adobong baboy to guinataan alimango and halo-halo, the Filipino restaurant has thrived in its prime location near Oxford Street for the past two decades, garnering a steady stream of high-profile patrons. 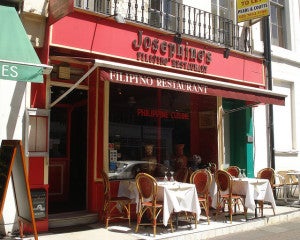 The restaurant’s celebrity clients include the likes of comedians Ricky Gervais, who has thrice dined at the restaurant, Stephen Merchant and Karl Pilkington; ex-Mayor of London Ken Livingstone; and MP George Galloway, who has become a regular customer.

Following the success of his Filipino restaurant business in the UK, Poniente seeks to return to his homeland and focus more energy on improving the family’s resort, which although operational, remains basic in comparison to similar places.

Poniente originally obtained the resort’s five hectares of verdant, sprawling land in Amadeo as a kind of “retirement plan.”

“I’d always had the idea of a hot or natural spring since before I bought the land. I chose this place in the Cavite area because I was born only a couple of miles from here. It was familiar to me.”

Two years after purchasing the land, building basic infrastructure, and obtaining the right hygiene licenses, Poniente officially opened the natural mineral springs to the public in 2005.

According to Poniente, the benefits of the natural springs go beyond the recreational.

“When we had the natural springs properly checked out, we found out that the water was full of minerals, including potassium, magnesium, calcium, and so on,” says Poniente. 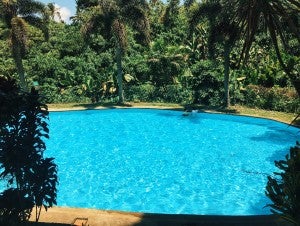 “The water actually has many healing properties, and so far people who have come here with health problems have found that regular visiting has helped their health immensely.”

“When my cousin had a heart attack, he couldn’t even walk,” the owner recalls. “We helped him come here to the springs, where he would relax in the water for a while. Within a month, he was recovering faster than expected.”

“Even people with skin problems, like dry skin or eczema, have come here and found that their condition improved.”

However, Poniente has plans to further develop the remaining land and existing resort into something much more complex within the next five years. 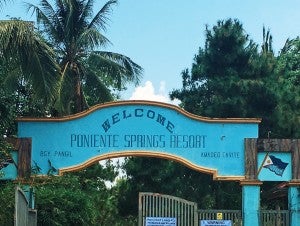 “It’s only in the last year that I really started coming back here and thinking about what direction to take the resort in. In the foreseeable future, I want to develop it properly. We’re planning kubos, a restaurant – even if it’s just a carinderia – and accommodation.”

“Last year when I was here, we almost couldn’t accommodate people in the high season. It’s top priority,” the owner adds.

When I mention the possibility of partnering with local businesses or developers, Poniente is firm on his desire to maintain managerial control: “I’d like to develop the place on our own, without anybody to disturb us, asking questions and making demands.”

Poniente increasingly splits his time between the UK, where he is mostly based, and the Philippines, where he plans to spend most of his time in the near future.

“There’s a very big difference between running a business in the UK and the Philippines. I will be moving here soon to start developing the resort full-time.” – @illumelation