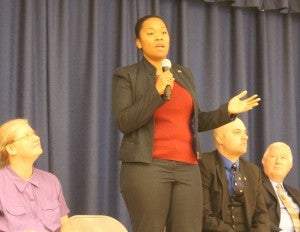 WASHINGTON, D.C. — Elizabeth Matory, 36, of Silver Spring, Maryland is hoping to be the first woman of Filipino and African American heritage to represent the state’s District 8 in the U.S. Congress.

If she wins, she will be the Republican counterpart of Congressman Bobby Scott (Dem-Virginia 3), the first African American representative from Virginia, who is also the first and only American of Filipino descent currently serving as a voting member of Congress. Scott’s maternal grandfather is Filipino.

Matory’s mother, on the other hand, is a Filipino who immigrated to the U.S. in the 1960s. She married an African American whom she met when they were both serving as surgeons at Howard University Hospital in Washington, D.C. 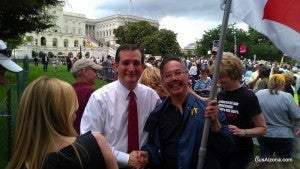 “I’m a proud Republican conservative,” Matory declares. “Growing up in a mixed environment has fueled my life-long commitment to serve my community and country.”

Of the three remaining Republican presidential contenders, Gov. John Kasich of Ohio comes closest to her political convictions. She says she likes his moderate and compassionate brand of conservatism and supports his positions on early childhood education and legalization of undocumented immigrants.

“Kasich is a sensible and pragmatic politician who can work in a bipartisan way to find solutions to our nation’s problems,” Matory explains.

Also running for an elective post in the April 26 Maryland primary is Filipino American entrepreneur Gus Alzona, 62, of Silver Spring. An avid supporter of Republican presidential contender Ted Cruz, Alzona is vying for a delegate seat to the Republican Convention. 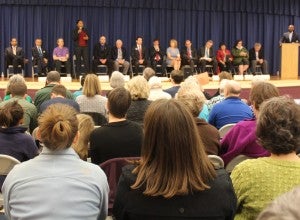 Liz Matory takes her turn at the mike during a candidates forum where 17 contenders for the U.S. Congress District 8 seat spoke before 200 Maryland citizens. JON MELEGRITO

As a delegate (assuming Cruz wins), Alzona will be one of 2,742 delegates who will choose the party’s presidential nominee when they convene in Cleveland, Ohio in July.

To help ensure a Cruz victory, Alzona recently formed the Maryland Catholic Coalition for Ted Cruz, serving as its chairman. The Catholic Church, with 837,338 adherents, is the largest religious group in the state, constituting 21 percent of the population.

Although recent polling suggests that Cruz is trailing Trump by 9 points in Maryland, Alzona is confident Cruz will pull it off and beat the billionaire mogul.

“I’m all the way in for Ted Cruz,” he says. “Since taking office in the U.S. Senate in January 2013, Senator Cruz has proven himself as a true constitutional conservative in defense of the freedoms and liberties of all Americans. He is the most qualified candidate for President to lead this great nation on a noble crusade to restore the American Dream and stand up to our enemies abroad.”

Currently an at-large member of the Montgomery County Republican Central Committee, Alzona has run for Congress twice before in District 8. Although he lost both contests, he remains actively involved in the Republican Party, having served as a party official and activist for more than 20 years. 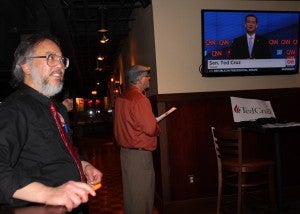 Gus Alzona listens to his favorite candidate during a debate watch party he organized recently as chairman of the Maryland Catholic Coalition for Ted Cruz. JON MELEGRITO

Alzona and his Caucasian wife, Elizabeth, have three children. His 44-year-old son, Marcus, is an alternate delegate for Ted Cruz. Their two daughters, Jennifer and Angelica, are Democrats and they support Bernie Sanders. “My wife is a Republican, but she’s undecided at this point,” Alzona says. “As to my daughters, I tried but I can’t change their minds.”

A musician, Alzona plays guitar in a band when he’s not politicking or selling real estate for a living.

To Matory, achieving her dream of winning election to Congress poses formidable challenges. First, she has to defeat four other Republicans running in the April 26 primary. Then she has to beat the Democratic nominee, a Green Party candidate and a Libertarian in the November elections.

In a district where registered Democrats outnumber Republicans 2-to-1, a Democrat is more likely to retain the House seat vacated by Incumbent Congressman Chris Van Hollen, who is running for the U.S. Senate. President Obama won the 8th with 62.8 percent of the vote in 2012.

But Matory is unfazed. Following last November’s Republican wave, including the election of a Republican governor in 2014, Republicans aren’t conceding anything to the Democrats.

“I’m going to work very hard to win votes,” she says. “I am confident my message of bringing moderate, balanced leadership back to Congress will resonate with voters in my district.”

Matory ran as a Democrat in 2014 for the Maryland House of Delegates. “I grew up a Democrat – almost a given since I am black and my family lived in Washington, D.C.,” she told a reporter recently.

After losing the Democratic primary, she chose to be politically unaffiliated for six months. She decided to become a Republican, she says, because “the party aligns more closely with my values and view of government’s role. The Republican Party was founded to be a champion of liberty and rights.”

In a recent interview with an online publication, Matory describes how the party’s platform inspires her. “I discovered I was a Republican. … As an African-American woman I … thought that the Democratic Party was the only option for us. I think that we’re being taken for granted.”

“Family is very important to me, and I’m proud of my Filipino heritage running through my veins,” Matory says. “Many members of my family have served in the military, including my brother, Bill, who is a major in the United States Marine Corps, my father who served in the Air Force, and my paternal grandfather who was a Filipino World War II veteran and survived the Bataan Death March.” 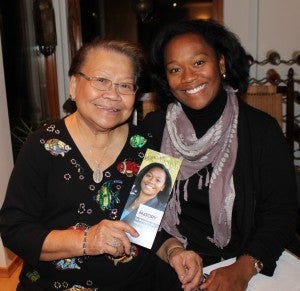 Because of their service, she adds, “I have this great responsibility to pay it forward, and give voice to victims of social and economic injustice.”

Matory has a law degree from Howard University and an M.B.A. from the University of Maryland. Currrently a business consultant for change management, she has worked in primary and higher education, the music industry, and now in clean energy.

And now she wants to represent her district in Capitol Hill. “There are only seven women in Congress who are under 40,” she says. “I want to be the 8th.”

With the primary only a few weeks away, Matory is calling on Filipino American voters to “research all the candidates’ positions and make enlightened choices. Of course, I need your support, so please go out and vote for me.”