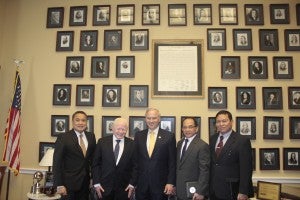 The Philippine officials noted the SFRC’s instrumental role in sustaining U.S. interest in the Asia-Pacific region and in giving substance to the Asia pivot policy.

“We recognize the considerable impact that the Committee’s initiatives has had on increasing U.S. foreign military financing (FMF) to the Philippines and in ensuring that the United States continues to be engaged in our region,” said Cuisia.

Senator Corker observed the importance of raising military in view of China’s behavior.

On the other hand, Senator Cardin reiterated that while the U.S. maintains its neutrality with regard to the South China Sea dispute, his country takes a strong position against provocative actions. He also expressed his firm belief in the rule of law and recognized the leadership of the Philippines in developing a regional Code of Conduct.

Representative Randy Forbes (GOP-Virginia), a senior member of the House Armed Services Committee and a member of the U.S.-Philippines Friendship Caucus, largely echoed the views of his colleagues in the Senate.

Forbes recently scored China’s recent actions in the South China Sea and reaffirmed the importance of the alliance between the U.S. and the Philippines to the maintenance of peace and prosperity in the region. 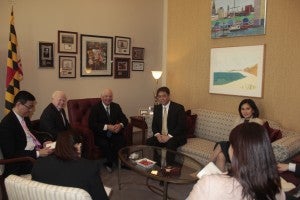 “China’s behavior in the Asia-Pacific has undermined regional stability and unnecessarily antagonized the Philippines and other partners in the region. The United States has an obligation under its decades-old security treaty with the Philippines to resist acts of aggression against our ally,” a portion of Forbes’ statement read.

Forbes expressed the opinion that the United States needs to be more present in the South China Sea and that joint patrols would be “hugely important, helpful and useful.”

The Philippines’ campaign to combat trafficking in persons was likewise discussed with the Senators. 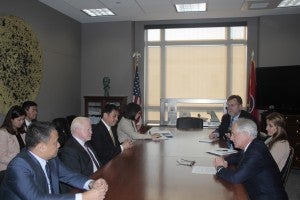 The meetings with the U.S. lawmakers also aimed to shore up greater support for a bill seeking to award a Congressional Gold Medal, collectively, to the more than 260,000 Filipino veterans of World War II.

The bill entitled “Filipino Veterans of World War II Congressional Gold Medal Act of 2015,” was introduced in the House (HR 2737) and the Senate (S1555) in June 2015. Cardin and Forbes are among the bill’s co-sponsors.

The bill includes a historical account of the dedicated service of Filipino and Filipino American servicemen and service women during World War II and recognizes them for their courage, bravery, and valor as they served under the command of the United States Armed Forces of the Far East.