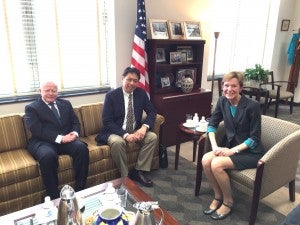 Philippine Ambassador to the United States Jose L. Cuisia, Jr. and Acting Secretary of Justice Emmanuel L. Caparas met with Susan Coppedge, ambassador-at-large to Monitor and Combat Trafficking in Persons and Senior Adviser to the Secretary of State and state counselor and former U.S. Ambassador to the Philippines Kristie Kenney.

The U.S. Department of State is mandated to issue the annual Trafficking in Persons (TIP) Report, which is the U.S.’ principal diplomatic tool in engaging foreign governments in anti-trafficking efforts

In the TIP Report, the Department of State divides foreign governments into tiers based on their perceived efforts to acknowledge and combat human trafficking. A Tier 1 ranking signifies full compliance with the “minimum standards for the elimination of trafficking” as defined in U.S. domestic legislation, while Tier 3 indicates non-compliance and no significant efforts towards compliance.

Tier 2 are countries whose governments do not fully comply with the minimum standards, but are making significant efforts to bring themselves into compliance. The Philippines has maintained a Tier 2 ranking since 2011.

“The decrease in the number of recommended actions for the Philippines from 13 in 2014 to only nine in 2015 proves that we are making inroads in the fight against human trafficking. A Tier 1 ranking is definitely within reach,” Ambassador Cuisia declared.

Caparas, whose department co-chairs the Inter-Agency Council Against Trafficking (IACAT), apprised Coppedge of developments in the investigation and prosecution of TIP and related cases.

Coppedge acknowledged the diligence of the Philippines in combating TIP, considering the large number of overseas Filipinos. She described the Department of Foreign Affairs’ (DFA’s) Regional Anti-TIP Workshops as a “good model” to enhance the protection of citizens who are outside national borders. She observed that the Philippines is “on the right path” and gave positive remarks in reference to the country’s reporting of TIP cases.