Dutch artist on democracy: ‘We vote and don’t feel represented’ 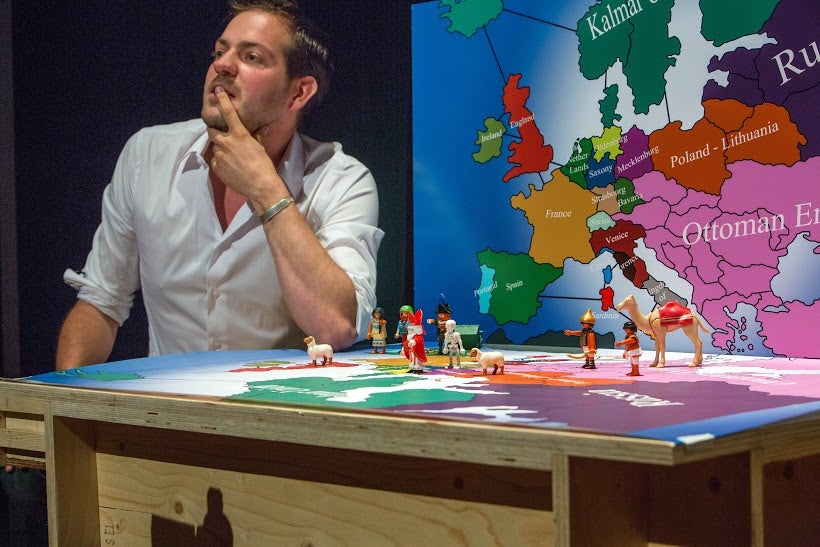 The problem with most democratic countries like the Philippines in this day and age is while people get to freely vote, they don’t really feel well-represented by their chosen leaders, a Dutch visionary artist said on Tuesday.

In his “Search For Europe” talk at the University of the Philippines-Diliman, Lucas de Man shared his recollections from his interviews with young artists and creative professionals when he travelled to 17 cities in eight countries within 30 days, which proved to be relevant to the Philippines, only two months ahead of its national elections.

Amid perennial problems, De Man, founder and artistic leader of Company New Heroes, said the world in general needs more “visionaries” who would actually act on their goals.

“I believe we are in a period of transition going from one world to another, but we don’t know yet where we are going,” De Man told an audience mainly composed of students, teachers and members of the media at the UP Theater.

Citing the importance of organizing social pressure in the government especially in the face of privatization or what he called “enclosure of the commons,” De Man said nations were being hounded by a “systematic failure” when the system “tries to protect itself more than the vision.”

But while saying that there was no single solution that can address societal problems, De Man said people, bound by a common experience, can contribute to the transformation process by believing that they are citizens and not mere consumers.

“Not the President, not the one in the street—nobody knows the answer. The only thing I know is there’s a big transformation happening in the world and that my generation are the next leaders so we have to decide how we are going to do this,” De Man added.

He also advised the younger generation, who is often labelled as “spoiled” and “indifferent,” not to underestimate their capability to be agents of change, especially in the age of the Internet. De Man, however, noted that technology is just a tool and that change should happen offline.

“There’s always a little voice shouting to me, ‘who cares what difference it does make?” he said. “A real visionary is someone who has a vision and acts upon that vision.”

De Man said that the youth, as next leaders, should not be afraid to fail and commit mistakes along the way because things don’t always work.

“And we don’t need to know all the answers. What we do every day, step by step, we make little bits of society,” he added.

De Man’s performance lecture was part of the Embassy of the Kingdom of Netherlands’ Inspire Innovation lecture series, which marks the kingdom’s 65 years of diplomatic ties and 150 years of consular relations with the Philippines. CDG