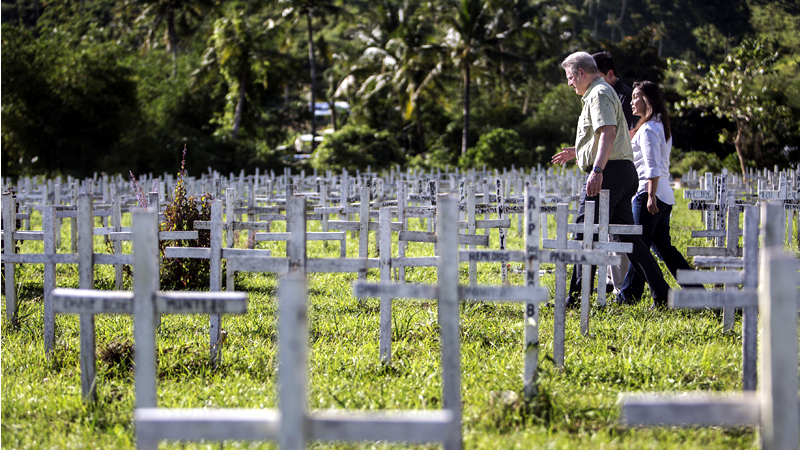 GORE IN TACLOBAN Former US Vice President Al Gore, accompanied by Sen. Loren Legarda and Mayor Alfred Romualdez, visits on Saturday a mass grave in Tacloban City where victims of Supertyphoon “Yolanda” are buried. Gore is in the Philippines for a climate change training workshop starting Monday. He praises the Philippines for having two of the best climate laws in the world—the Climate Change Act of 2009 and the People’s Survival Fund. CONTRIBUTED PHOTO

AL GORE has no doomsday message for the Philippines as he starts today (Monday) the training of more than 700 climate warriors from all over Asia who have converged in Manila for the “Climate Reality Leadership Training Corps.”

In fact, the former US vice president told the Inquirer Sunday that because of Supertyphoon “Yolanda” (international name: Haiyan) the country had the “moral authority” to take a leadership role in helping the world shift its heavy reliance on coal to renewable energy.

Gore said it was “not smart” to build new coal plants. The Philippines is nevertheless building more coal-fired power plants.

Unknown to Gore, the Aquino administration has approved 21 new coal-fired power plant projects in the past five years despite its commitment to reduce carbon emissions.

The Nobel peace laureate and global climate activist arrived in Manila last Saturday to personally preside over the training of participants to the climate leadership training, which runs from Monday to Wednesday at the Hotel Sofitel.

“Yes, why not? You have some of the best solar resources in any country of the world because of your latitude. You have fantastic wind resources,” Gore told the Inquirer in an exclusive interview, when asked if the Philippines could become a leader in developing solar and wind power as alternative sources of energy.

“I think the Philippines occupies a special role because of the respect it has in the world community,” he said, citing the “economic strength” the country “demonstrated to the world during a period when … the rest of the world was devastated by the 2008-2009 Great Depression.”

The Climate Reality Leadership Training Corps is part of the Climate Reality Project founded and chaired by Gore, a nonprofit organization that aims to solve the climate crisis. Gore will explain to the soon-to-be climate warriors what climate change is all about and what individuals can do about it.

Over the last 10 years, there are thousands of trained “Climate Reality Leaders” in over 57 countries who are already working at every level of society to solve climate change, according to organizers of the Manila training sessions.

During the three-day training, renowned climate scientists, communicators, storytellers and grassroots organizers will speak about reaching and inspiring people to take climate action.

Gore acknowledged the particular vulnerability of the Philippines to typhoons. Being in the Pacific typhoon belt, the country “attracts constant attention from the world, which has admired the Philippines’ resilience,” he said.

Gore referenced Yolanda, the strongest recorded storm to ever hit land that lashed nine regions of the country on Nov. 8, 2013, killing 6,300 people, mostly in Eastern Visayas.

“I think that Haiyan, in particular, underscored not just that single event but brought into focus the courage and resilience of the [Filipino] people, and the immediate translation of that in the Warsaw climate conference [in 2013] cannot be overemphasized. It really touched the hearts of the people around the world,” Gore said.

He could still vividly recall the “image of the nation standing up courageously” to one of the greatest demonstrations of a climate change impact.

“And as a developing country—some would say—emerging economy, it has a unique position in the community of nation,” he said. “Its geographic position gives it a particular relationship to all of East Asia—and of course the historical ties to the US actually make the Philippines a kind of a hub for geopolitics.”

Gore noted that the Philippines’ enduring ties to America were seen as very significant in the United States.

He joked that Daly City or parts of Los Angeles in California could be another province of the Philippines because of the large presence of Filipino-Americans in the area.

Gore praised the country for its advanced climate change laws, ostensibly referring to the Climate Change Act of 2009 and the People’s Survival Fund of 2012.

Both laws were authored by Sen. Loren Legarda, the United Nations Global Champion for Resilience.

“She is truly a leader not only in the Philippines but among her counterparts in the international community around the world. Her proposals [for Disaster Risk Reduction and climate change adaptation] are now being looked at as models for the world,” Gore said.

He noted that the country was learning its lessons from Yolanda.

Quoting the forecast of scientists around the world, including those from the Philippines, he said it was being predicted that these typhoons would “likely to come stronger still with the continued warming of the oceans.”

More than 90 percent of the extra heat trapped by the man-made global warming pollution—which has triggered temperatures to rise since the Industrial Revolution—goes into the oceans.

“The ocean waters around the Philippines are warming faster than anywhere else on the planet,” Gore warned.

“If there is another place that is warming faster, I don’t know what it is. As a result, sea level is rising faster in the Philippines than anywhere else on Earth mainly because of thermal

expansion, and also of course, the melting of ice in Greenland and Antarctica is accelerating sea level rise everywhere in the world,” said Gore.

He said that the combination of higher sea levels and more powerful storm surges made island-nations particularly vulnerable to the impact of climate change, stressing that “the warming of the seas and rising of the seas are faster here than virtually anywhere on Earth.”