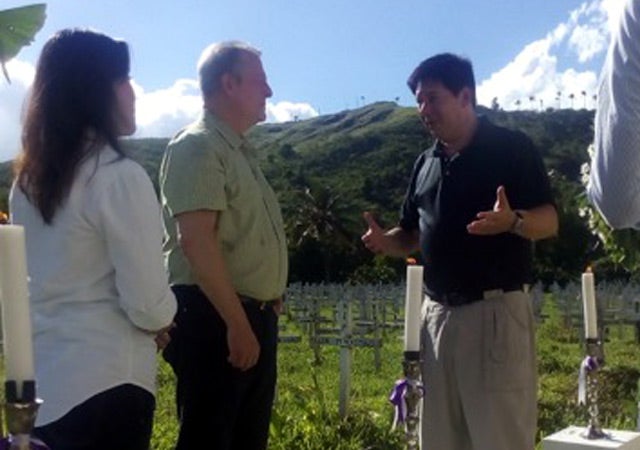 Former US Vice President Gore is briefed by Tacloban Mayor Alfred Romualdez on the number of people killed during the onslaught of Supertyphoon “Yolanda” (international name: Haiyan). Also with Gore and Romualdez at the mass grave in Barangay Basper, Tacloban City is Sen. Loren Legarda. photo by Joey A. Gabieta, Inquirer Visayas

TACLOBAN CITY-Former United States Vice President Albert “Al” Gore made a quick visit to this city which had been devastated by the world’s strongest typhoon to hit land.
City officials, however, hoped that the visit would remind the world again on what happened to Tacloban  when Supertyphoon “Yolanda” (international name: Haiyan) unleashed its wrath on Nov. 8, 2013 and killed more than 2,200 people and destroyed at least P22-billion worth of property.
Gore, who has been calling attention of world leaders of the ill-effects of climate change, was accompanied by Senator Loren Legarda.

READ: Al Gore to visit PH in March to train climate communicators
They arrived here at 2:45 p.m. on Saturday through a Philippine Airline flight and were welcomed by City Mayor Alfred Romualdez.
Gore, who did not entertain any media interview, was scheduled to return to Manila at 6 p.m.
Upon his arrival, Gore went to Barangay (village) 88, considered to the worst’s hit area in Tacloban during Yolanda, and had a 10-minute talk at the house of one of the residents, Demetria Raya.
“We are proud and shocked at the same time that he visited us. He is a former leader of the United States. We just hope that his visit will once again remind the country and the world on the effects of Yolanda which was said due to climate change,” village chair Emelita Montalban said.

READ: Al Gore to focus on PH experience in climate change
From the village, Gore went to the mass grave located at Holy Cross Memorial Park in Barangay Basper where 2,200 victims of Yolanda were buried.
He spent 20 minutes at mass grave and prayed silently.
He, Legarda and Romualdez also offered a wreath and lit candles.
Romualdez briefed Gore on how many were buried at the mass grave and how many of them were actually identified by their families.
The government, through the National Bureau of Investigation, conducted its disaster victims’ identification (DVI) in an effort to name those who perished due to Yolanda.
On his way to the City Hall, Gore’s convoy stopped by at the Yolanda memorial at Anibong district.
The memorial park, which has a lot area of 120 square meters, is the exact spot where MV Eva was beached after it was washed inland due to the storm surge and killed 11 people.
Its centerpiece is the ship’s bow after the rest of the boat was cut into pieces and sold as scrap.
The memorial park has now become the most visited “place of interest” in Tacloban.
Marilou Tabao, chief of staff of Mayor Romualdez, said that they were “glad” that Gore visited Tacloban.
“I guess, in his talks about climate change, he will use Tacloban as talking point. Perhaps his visit to the Philippines will not be complete without visiting Tacloban,” Tabao said.
Tacloban is considered to be the ground zero of Yolanda.