Ateneo takes the lead in ‘One Big Fight’ | Global News

Ateneo takes the lead in ‘One Big Fight’ 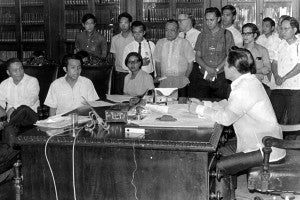 In 1982 Ateneo de Manila University was accused of cowardice by alumni angered by the school’s reluctance to hold a memorial for Edgar Jopson, the true blue Atenista who was killed fighting the Marcos regime.

One graduate blasted Ateneo for “taking such a fraidy cat stance” against a ruthless dictatorship.

Last week, Ateneo, known for its symbol the Blue Eagle, was a roaring lion.

The target of the university’s indignation: Bongbong Marcos, son of the late tyrant who is running for vice president while shamelessly denying the crimes of his father.

“We deplore the shameless refusal to acknowledge the crimes of the Martial Law regime,” the statement signed by more than 500 Ateneo professors said. “We reject the revision of history, disturbing vision of the future, and shallow call for ‘unity’ being presented by Marcos Jr. and like-minded candidates in the 2016 elections.”

This time Ateneo spoke with one voice.

After the faculty, the university’s top officials, including the presidents of Ateneo’s major campuses, quickly joined the faculty in denouncing Marcos Jr.

“The Marcos dictatorship should be remembered as one of the darkest periods of Philippine history,” the Ateneans said. “We reaffirm our responsibility as teachers and professionals to keep the spirit of EDSA 1986 alive by imparting to the young that the structures, actions and ideas — including the many lies — that allowed the Marcos dictatorship to impose and perpetuate itself, should be eliminated and never again be allowed to flourish.”

“We vow as teachers and formators to continue to tell the stories of the brutality and corruption of the Marcos family, regime and closest allies.”

These are powerful words that Filipinos who survived the Marcos regime have hoped to hear from the nation’s leaders and educators.

Many young Filipinos don’t know what happened to us during the Marcos nightmare. Educators can play an important role in fixing this problem.

Within days, Ateneo’s message was spreading.

The influential Catholic Educational Association of the Philippines, which represents 1,425 CEAP schools, colleges, and universities, endorsed Ateneo’s position saying it supports the call “Against Marcosian Snares and Imeldific Lies.”

“With the same fervor, we cry our hearts out, ‘Never Again!’” the association said.

Two years ago, Ateneo was wrestling with the controversy over the warm welcome it gave the dictator’s widow, Imelda Marcos.

The Jesuit university’s president Fr. Jett Villarin was forced to issue an apology.

“Please know that in the education of our youth, the Ateneo de Manila will never forget the Martial Law years of oppression and injustice presided over by Mr. Ferdinand Marcos,” he said. “We would not be catching up on nation building as we are today, had it not been for all that was destroyed during that terrible time … I would like to reaffirm that we have not forgotten the darkness of those years of dictatorship…”

Ateneo is living up to that promise.

And somewhere, Ateneo’s most distinguished alumni, who died resisting the fascist reign of Ferdinand Marcos — Eman Lacaba, William Begg, Ditto Sarmiento, Ferdie Arceo and Edgar Jopson — are smiling and maybe even yelling out with pride: “One Big Fight!”

The famous Ateneo cheer is typically heard in basketball games.

This is more important. Ateneo has taken the lead in much bigger fight.