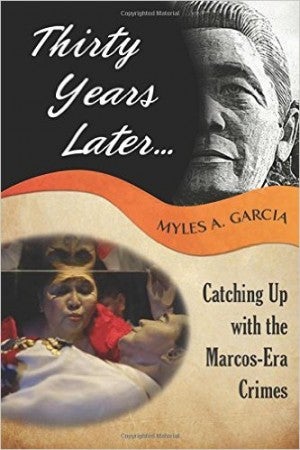 Cover of “Thirty Years Later…Catching Up with the Marcos-Era Crimes” by Myles Garcia.

ERIE, Pennsylvania — “My hope is that if it can even sway a few voters away from the Evil Spawn, then I would be gratified,” San Francisco author Myles Garcia says of his new book and the efforts of Ferdinand “Bongbong” Marcos Jr. to be elected vice president of the Philippines.

Garcia will launch his book “Thirty Years Later…Catching Up with the Marcos-Era Crimes with a book signing at the Philippine Center in San Francisco on March 11.

“I wrote this book to help remind the Filipino people, especially the new, young voters, of the dangers of the Ferdinand ‘Bongbong’ Marcos, Jr. or Jejomar Binay candidacies and the waste and turmoil left behind by the illegitimate, twenty-year rule of Junior’s parents,” states Garcia.

“I want people to have a comprehensive account of the excesses of that shameless hussy at the expense of a poor nation!”

Garcia is clear from the start that he’s writing for readers who’ve lived in the Philippines and for readers who may not be familiar with the country and its culture, much less its history, taking care to explain political and societal dynamics alongside the data he’s chosen to present.

He breaks down information into lists or bulleted short paragraphs, providing readers with punchy, short reads per chapter.

He takes on the stance of a layman, if you will, instead of a historian, economist or political analyst. The better to reach fellow laymen, though he weaves these viewpoints into his notes, constantly reminding readers of the economic fallout caused by past (and sustained by present) events and circumstances.

The book begins with a brief history of how the couple came to power and dives right in to listing down the families that became Marcos cronies.

Following chapters lists Imelda Marcos’ travels around the world, her social-climbing efforts among other countries’ royalty and heads of state, and the big-ticket items she purchased, including jewelry and real estate.

Much of the book features “Imelda Marcos and her highly visible shenanigans…a natural consequence of Imeldiana lore just being more visible than the boring, invisible scheming and financial shell games that Marcos played with their stolen billions.”

Garcia then recounts the court trials in the U.S. and in Manila where Imelda was acquitted.

While earlier chapters may have a surreal, gaudy, soap-opera feel due to the excessiveness of the crimes listed, Garcia reminds readers in later chapters that it’s all far too real, with a recounting and accounting of how much the family had stolen and how much has been retrieved by various means.

He then posits that “it might be time to bring the curtain down” on retrieval and disbursement efforts, pointing out that “whatever has been recovered, also deduct the cost of the hunt–the salaries [of the staff], administrative expenses, fees to foreign law firms, etc.”

Where are they now?

He provides a “Where are they now?” list of the involved parties, alive and dead, and concludes with an appeal to his fellow Filipinos to choose well in this year’s presidential elections.

Garcia moved to the U.S. one month before martial law was imposed in 1972. “Because I spent the first 24 years of my life in Manila…I feel uniquely qualified versus other foreign journalists, to write about this chapter in history with a great deal of authenticity, distilled with the perspective of time and distance,” he says.

“While I never personally suffered at the hands or because of the decrees of the Great Plunderer…I feel for those who were less lucky and am still outraged at how people…[were] fooled and betrayed by the very people entrusted to lead them.

Garcia is a correspondent for PositivelyFililipino.com, where two of his articles have won the Philippine American Press Club’s Plaridel Prize for Best Sports Story two years in a row.

A life-long Olympic aficionado, he is also the author of “Secrets of the Olympic Ceremonies,” which was updated with a 2014 edition.

“Thirty Years Later…Catching Up with the Marcos-Era Crimes” by Myles Garcia is available in paperback at Amazon.com. The ebook edition will be available later this year. In the Philippines, the book will be available at Popular Bookstore, Quezon City.