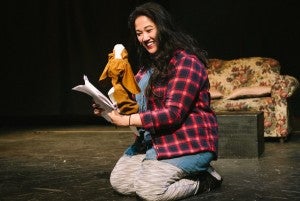 SAN FRANCISCO – Filipino-American theater group Bindlestiff Studio will be staging “The Love Edition” (TLE) from March 3-19 in their studio theater on 6th Street.

The production showcases new works “about love, heartache, and the weirdness in-between.”

This year’s theme is “Always & 4Ever” and features seven new ten-minute plays “ranging from the hilarious to the heartfelt.”

Four of the seven plays this year are by Filipino American playwrights.

“57 Varieties” by Ignacio Zulueta is about Sarah and Brian’s third month anniversary that comes with an unexpected twist in bed. It’s directed by Joe Cascasan.

“Life of Sin” by Manny Cabrera, directed by Yato Yoshida, is about Patrick and Karen’s honeymoon in the Philippines that’s rudely interrupted by the mysterious Derrick.

“Puppy Love” by Kristine Reyes is about a couple’s contemplations on their relationship’s future with the arrival of a furry four-legged frenemy. Directed by Alexis Dayers.

The three remaining plays are “Woo Her Like a Badass” by Donna Latham, directed by Golda Sargento, a modern take of a suitor trying to literally holler at someone he’s trying to woo.

In “The Sunshower Bride” by Maggie Lee, directed by May Liang, Miranda’s secret is revealed during her wedding day.

In “Kill Me Please” by Rhea MacCallum, directed by Laura Priscilla Paule, Gloria, who is a fan of Stan’s work, tells him that her dying wish is to be a part of his legacy.

First conceived by Bindlestiff actors and producers Chuck Lacson and Raf Lim in 2006, this year’s TLE received more than 60 submissions from playwrights across the U.S.

Playwright Conrad Panganiban, one of this year’s producers, says, “Bindlestiff Studio is ecstatic to be presenting work from playwrights from New York and Seattle. It was challenging to pare them down into the final seven plays, but the reward is seeing how each of the plays complement each other.”

Panganiban notes that all seven plays will be directed and performed by local artists.

“The Love Edition: Always & 4Ever” is Bindlestiff Studio’s first production for 2016. “The first of many events cultivating talented young individuals with the intention of self-empowerment through expression,” says artistic director Lorna Velasco.

Other productions planned for the year include “Amok,” a marathon staged reading of plays and “The Girl Most Likely To,” a play by Michael Premsirirat. Granny Cart Gangsta, an all-female improv group, is also scheduled to perform.

Bindlestiff Studio will also produce its first ever Tagalog production from April 21 to May 7. “We will be staging three one-act plays from the 2015 Virgin Labfest, an annual festival of new plays held in Manila.”

Tolentino laments losing Filipino talents to other countries, wants to ‘retrieve’ them