If elected president, Duterte’s foreign policy to be lukewarm to US | Global News

If elected president, Duterte’s foreign policy to be lukewarm to US 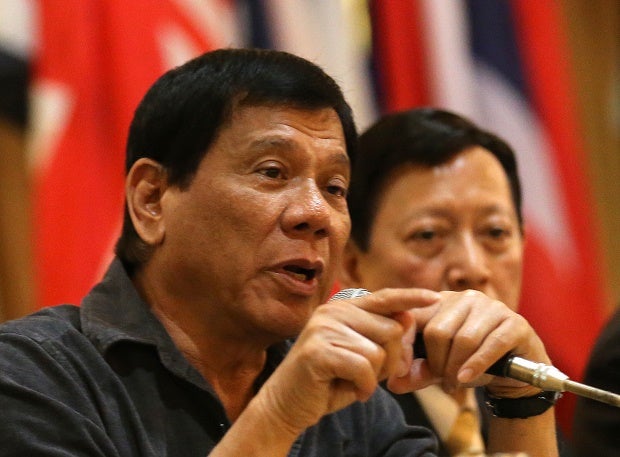 Should he get elected president in the upcoming elections in May, expect the foreign policy of presidential candidate Davao City Mayor Rodrigo Duterte to be lukewarm to the United States.

His running mate and spokesperson Senator Alan Peter Cayetano voiced Duterte’s position on the implementation of the Enhanced Defense Cooperation Agreement (EDCA), the defense deal between the US and the Philippines, during the annual business forum organized by the Joint Foreign Chambers of the Philippines dubbed as “Arangkada” on Tuesday.

Cayetano said EDCA, the 10-year agreement, which has recently been ruled constitutional by the Supreme Court does not assure that the US will defend the Philippines from China in case it gets involved in a confrontation with the latter over claims in the South China Sea.

The EDCA allows the US to rotate its troops and access Philippine military bases. In return, the US promised to help modernize the Philippines’ armed forces and build and improve military infrastructure and facilities.

The controversial deal has been challenged by left-wing groups for fear that it will allow the return of the American bases in the country.

“The Americans knew about the intrusions of the Chinese into the West Philippine Sea. But they only talked about it in the last few years,” Cayetano said.

Cayetano lamented that US President Barack Obama during his state visit to our country in 2014 gave a “generic” response to the question if it will defend the Philippines’ territory against China.

Obama, unlike his previous statement in Japan that US will stand by the Japanese in defending their territory in the East China Sea against China, did not give a categorical statement with regard to the Philippines, Cayetano said.

“We gave EDCA for free,” Cayetano said noting that when it was signed by our country and the US, the compensation for the use and access of the Philippines’ military bases was likewise not guaranteed.

Nevertheless, Cayetano said the Duterte’s camp still wants to continue implementing EDCA, however, “from a position of strength.”

“We will be decisive. And in the planning itself, we know what are the equipment and technology to [be] given or loaned to us,” Cayetano said.

He said Duterte capitalizes on self-sufficiency. “Even if the US is our friend and ally, we won’t depend on them completely,” he said.

In previous speeches and interviews, Duterte expressed his willingness to set aside the Philippines’ claims in the disputed sea if China would help our country build a railway system.

READ: Duterte tells China:  Build us a railway and let’s set aside differences for a while

Duterte announced earlier he is also open to enter a joint exploration partnership with China for oil and gas in the West Philippine Sea provided that it drops its claims on disputed waters.

The Philippines has a pending arbitration case challenging the legality of China’s nine-dash line claim in the West Philippine Sea at the United Nations.

The arbitral tribunal is expected to issue a ruling before President Benigno Aquino III steps down from office in June. RAM

READ: US think tank: Court apt to rule vs China