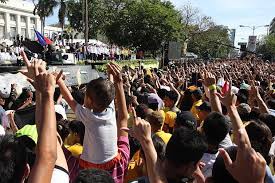 SAN FRANCISCO—Sponsors announced the winners of an essay contest marking the 30th Anniversary of the historic EDSA/People Power Revolution, which ousted the dictatorship of Ferdinand Marcos.

Filipino Americans between the ages of 18 and 30 tackled the theme of “Recapturing the spirit of 1986 People Power Revolution and What It Means to Me as a Filipino-American.” Entries came from the West Coast and the East Coast—California, Texas, Virginia, New Jersey and New York.

With care and passion, the contest participants explored their personal histories, thoughts and beliefs as they pondered the EDSA Revolution and its relevance to young Filipino Americans 30 years after the event.

The essays, identified to judges only by numbers, were read and scored by seven judges from Philippine American Writers and Artists (PAWA). The winning essays were determined according to the highest total scores received.

The results were officially announced at the EDSA People Power @30 Reception held at the Philippine Consulate General in San Francisco on Thursday, February 25.

Honorable Mention went to the next six highest entries after the top three:

PAWA, the EDSA People Power @30 Committee, the Consulate General of the Philippines in San Francisco, and community partners wish to thank all of the contestants who took the time to reflect, write and participate in this essay contest.