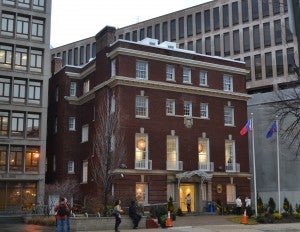 WASHINGTON, D.C. –Condemned and unused for nearly 20 years, the original four-story Embassy building, which housed the Philippine Commonwealth government-in-exile during World War II, is now a newly renovated structure along Massachusetts Avenue, a few blocks away from the White House.

The century-old brick building was abandoned in 1995, when the Philippine diplomatic mission took up quarters in its new location across the street.

The current chancery is described as a “four-story of beaux-arts design with a smooth-finish precast, blending nicely with the traditional limestone structures of Embassy Row.”

But the rejuvenated building, constructed in 1917, has plusses of its own. While it still sticks out as an antiquated facility, dwarfed by its towering neighbors, it can boast of having integrated modern technology and contemporary decor within its historic shell.

Apart from white honed marble flooring, “the most eye-catching feature was the coffered ceiling with crisscrossing beams in gleaming white that recalls the grandeur of Washington and Manila mansions,” says interior decorator and consultant Luis Florendo. “I’m very impressed with the welcoming, bright open spaces.”

The occasion was also a farewell reception honoring Del Rosario, who is stepping down from his post. Ambassador Jose L. Cuisia, Jr. and Mrs. Victoria J. Cuisia threw a big bash for the 78-year-old top diplomat and invited members of Congress, community leaders, State Department officials and all the consuls general to grace the event. 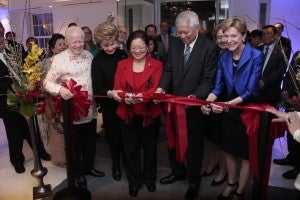 Tenor Alan Chan, Jr. later entertained the more than 120 guests who feasted on roast pig and other delicacies made to look even more delicious by the ethereal lighting emanating from the chandeliers, thanks to celebrated Filipino furniture designer Kenneth Cobonpue.

Drinks overflowed from an open bar.

Earlier in the evening, Msgr. Mariano Balbago, Jr. performed the Rite of Blessing by sprinkling holy water inside the premises. Mother Nature did her part by dousing the building with torrential rain. As it happened, a thunderstorm pummeled the city as guests started to arrive, but it failed to disrupt the party.

“This place looked like a dump when I first stepped inside back in 1962,” recalls former Maryland State Delegate David Valderrama, one of the guests,. “Now it glistens and sparkles like a gem.”

Valderrama also remembers how dark and forbidding the place was after Martial Law was declared in 1972. “If only these walls could talk, what a tale they’d tell,” he muses.

He recalls an incident when then Ambassador Eduardo Z. Romualdez was held hostage at gunpoint for eight hours inside his office by Filipino businessman Nap Lechoco. He claimed that the Marcos government refused to allow his teenage son to leave the Philippines despite repeated pleas. Marcos finally acceded to Lechoco’s demand. He was later convicted of kidnapping and sent to jail.

During the siege, the brick building was on all the major TV networks. Not very many people knew what it was until CBS News Anchor Walter Cronkite reported on the violent incident inside.

“The old embassy became a fortress after the assault on the ambassador in November 1974,” Valderrama says. “Security also became tighter because activists were always demonstrating, although police kept them 500 yards away. But that didn’t stop the lightning pickets.”

After Marcos’ authoritarian regime was ousted, the building’s front doors were thrown wide open once again on February 26, 1986. Prompted by President Cory Aquino’s call for reconciliation, Ambassador Emmanuel Pelaez invited once warring factions in the community to meet in the embassy to plan Philippine Independence Day events together. 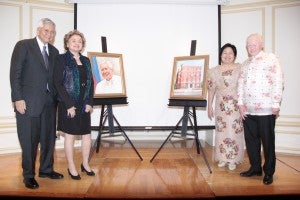 The first floor’s social hall became a regular meeting place for cultural programs, educational forums and other gatherings. “Anti-Marcos and pro-Marcos leaders eventually set aside their differences,” Valderrama said. “And the old Embassy served as a community center that fostered working relationships among the dozens of community organizations.”

Ambassador Raul Ch. Rabe, who succeeded Amb. Pelaez, continued making the embassy open and accessible despite its deteriorating condition. “Sometimes the heaters weren’t working and we’d be shivering inside during our winter meetings,” recalls Elvi Bangit of Tanghalang Pilipino, a cultural arts groups which often held rehearsals in the old building. “Now and then, we’d see a rat popping out of nowhere.”

There were also stories of ghosts and “ghostly encounters.” As recounted by Consul Elmer Cato, it used to be that the embassy was required to inspect and seal the coffins of deceased Filipinos before the bodies were flown back to the Philippines. It’s also possible, some embassy staff have suggested, that the souls of some Filipinos who came to the U.S. illegally and died here opted to remain in the country and sought refuge at the embassy. They are called “TNT ghosts.” (The three letters refer to undocumented immigrants who are hiding from authorities.)

From 1995 to 2012, the old chancery was vacant, with only pigeons taking up residence. Another occasional sign of life was a homeless man rising from a long sleep in the vestibule, right under the weathered crest hanging over the boarded-up entrance.

In 1998, the National Federation of Filipino American Associations (NaFFAA), led by its chairman, Alex Esclamado, signed a Memorandum of Agreement (MOA) with the administration of President Fidel Ramos to lease the building.

NaFFAA recruited a team of Filipino American architects and engineers who volunteered their expertise in planning the renovation. By this time, the building had slowly degraded due to lack of use. But the organization couldn’t raise the estimated $1 million to complete construction. NaFFAA had to give up the project.

During his stint as ambassador between 2001-2006, Del Rosario wanted to rehabilitate the building but couldn’t get the needed funding. Apparently, the Philippine Government did not have enough money to proceed.

Proactive and hands on

It was not until Ambassador Cuisia took over, after years of stalled plans, that renovation finally went under way in 2015. But three years before that, the first floor underwent some repairs so it could serve as offices for the consular services. 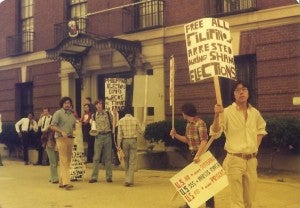 The old chancery was the frequent target of protests during the Marcos dictatorship. JON MELEGRITO PHOTO

“I take this opportunity to congratulate Ambassador and Mrs. Cuisia for being so proactive, so hands on, and for their stick-to-itiveness in seeing this project through until its completion,” said Del Rosario in his remarks. He applauded Ambassador Cuisia who “succeeded, where I had failed.”

Hedy Thomas, a Filipino American structural engineer whose firm was involved in the renovation, lavishly praises Mrs. Cuisia for her vision in reviving the chancery. “She said this place should be welcoming because people come here to apply for their travel visas, to get certification for a birth or a death, to take an oath as a dual citizen and even to get married,” Thomas says. “To her, this should be a people’s place where they make happy memories. So, we pushed hard to make sure it achieves these life-altering events.”

According to Thomas, the renovation (estimated to have cost at least $3 million) took a year and a half and required tearing down walls to open up spaces, replacing columns and installing systems to meet fire regulations.

Each floor, measured at 4,000 square feet, must be structurally sound to support the maximum capacity of 250 people. “By retaining the building’s façade while demolishing everything else inside, the structure keeps its historic significance and original grandeur,” Thomas points out.

“Even the new cobblestone driveway is beautifully landscaped and lighted,” Florendo points out. “Finally, an entry worthy of this most important and historic building.  I also like the front room’s main focal point where the un-curtained, multi-paneled traditional windows spanned the façade of the building. As a whole, it’s a clean, well-lighted place, providing soaring, clear, bright spaces that will set the mind and imagination free.”

Mencie Hairston of Bowie, Maryland, a long-time community leader, hopes the chancery annex will be more “functional, rather than fancy. This place has a history of being a service building, providing public spaces so people in the community and in the broader American public can connect with each other and celebrate our historic friendship.”