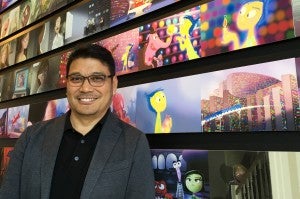 OK, I’m a few days late. Some people have been just too busy to remember.

Take for example the pride of Filipino filmmakers, animators and psychologists everywhere (that last bit should be clear in a second).
Ronnie Del Carmen is the man of the moment. By Sunday, maybe upwards of 60 million people around the world are expected to watch the Oscars. And Del Carmen is the only Filipino I know who is up for Best Original Screenplay for the Pixar hit, that explores human emotions, “Inside Out.”

“You know what this week is, what they’re celebrating in the Philippines,” I asked?

“I have no idea,” he said, so deeply focused on his work and the upcoming Oscars.

“It’s 30 years after the EDSA revolution,” I said.

“Oh my goodness, has it been 30 years, already,” he asked? “That’s fascinating, I’ve been gone a long time.”

We both had a good laugh, but once his memory was jogged, Del Carmen recounted the great moment at EDSA, when helicopters flew over the crowd, and everyone thought the screams were from people being killed. But they were screams of joy. The army flipped sides, literally. The military was helping set the country free from Marcos.

Del Carmen couldn’t believe it at first, half expecting the strongman would turn back the crowd. “I had lived under the regime since I was 12,” he told me. “It’s been part of you for so long.”

And then, within a few short years, the document his father, Rogelio, filed with U.S. immigration authorities petitioning him to America arrived.

Like many Filipinos before and since, he left his family with their blessing to go ahead and seek his opportunity and fortune in America. When he earned, he sent money back. And then he got his break as an animator.

He still goes back. Still thinks about it. But he’s a U.S. citizen now, and maybe after Sunday, an Oscar winner.

“I don’t really think about the revolution as much as I used to,” he told me. “It seems like the country has tried to find its way. It’s not a done deal, not everything became right all at once.”

Clearly, Del Carmen has moved on.

But for the citizens of the archipelago, their fate is their fate. In pesos. But it may be worse if you’re a Filipino who remembers history.

If you can’t leave, it’s easier to forget. That seems to be the case, 30 years after the fall of the dictator Ferdinand Marcos.

It really doesn’t matter if you experienced EDSA in the Philippines or not.

If the Philippines is in your heart, and in your blood, even an American Filipino like me knows the scar Marcos left on a community.

Marcos was the dividing line. You were pro-Marcos or you were anti-Marcos. If you were from Ilocano parentage like I was, then there was a generation gap.

If you were American, it gave you slight bit of objectivity, but only slight.

Remember, Presidents Reagan and Bush loved Marcos. Who can forget how President George Herbert Walker Bush once praised Marcos for “adherence to democratic principles and to the democratic processes.”

Oh yeah, remember the assassination of Sen. Benigno Aquino? I did not cover the EDSA revolution in 1986. But I covered the funeral of Sen. Aquino and the amazing funeral procession that drew nearly one million people to the streets of Manila in1983.

“That was the precursor to People Power,” Del Carmen told me. “It spelled in big bold letters, there is nothing this government can’t do to you and would do it with impunity.”

It took another three years for EDSA.

And now 30 years later, for all that Marcos did to the Philippines, he hasn’t been obliterated from the national memory.

For those under 30, they don’t need to forget. It’s built in when history is like Snapchat. It’s the only way the Marcos name can be as strong as ever.

You know, like Trump who wins Nevada across all demographics and proudly proclaims, “I love the poorly educated.” Is that politics in the Philippines?

Here’s Ferdinand Marcos Jr. coming on strong as a viable vice-presidential candidate. And no one is thinking, “Could this be the sequel?”

It’s an odd coincidence that the rise comes as Benigno Aquino III exits, the son of Cory, the ultimate beneficiary of People Power.

In his tenure, he wasn’t even Cory in yellow power drag.

Cory’s yellow garb made her a symbol of a popular movement. But her son has been a reminder that a generation didn’t achieve a lot of what people had hoped their power would bring.

Aquino the son has proved to be an affable if not inspirational leader: Nonoy the serviceable, mild mannered oligarch.

He doesn’t invoke his mother’s revolution. But maybe that’s the problem. Even Cory didn’t invoke all the hopes that people bestowed on her revolution.

Thirty years later, the longtime relationship with the U.S. military, despite a brief period were the bases were kicked out, is back, and maybe more urgently than ever to protect the West Philippine Sea.

The business district Makati is more like modern contemporary Asia than ever. And yet poverty still seems as rampant as ever.

As good as the economy may be for some, there is still Smokey Mountain in its new guise as Payatas dump, set elsewhere.

But from an American Filipino point of view, something has changed.

At no time in 30 years has the term oligarchy been mentioned more to describe… America.

In 30 years, the U.S. has such a shrinking middle class, it’s actually a lot more like the Philippines than ever. Inequality is a campaign issue.

In the Philippines, inequality is still a given. So when you have vinegar, make adobo.

Filipinos who were fortunate to immigrate or leave just seem happier being Global Filipinos, and keeping the Philippines in their heart but from a distance.

How to acquit one’s remorse?