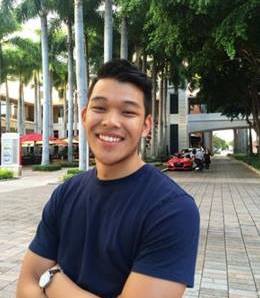 Matthew A. Santayana, 23,was a graduating nursing student and an active member of the Youth for Christ. He was one of two who died in an auto accident in Florida February 21.

MARGATE, Florida–Two Filipino American students died in an automobile crash at Interstate 75 in Sarasota County in Florida on early Sunday morning of February 21.

From the report of the Florida Highway Patrol it was learned that Michael J. Panopio-Mones,18, of Miami, was driving a Mazda when the car hit a concrete culvert in the median and a utility pole.

Mones was airlifted in critical condition to Tampa General Hospital and he is expected to survive. His passengers, Matthew A. Santayana, 22, of Margate, and Luis M. Villena, 21, of West Palm Beach were pronounced dead on the spot.

It was learned from an interview with Glenn Santayana, father of Matthew, that his son along with Villena and Mones were on their way to attend a basketball event of the Youth for Christ (YFC), a parachurch fellowship of the Catholic Church, of which the three are members. Santayana’s parents are leaders of the Couples for Christ (CfC).

Matthew Santayana and Villena were students at Florida International University (FIU) where Santayana was scheduled to graduate from nursing while Villena was taking a course in microbiology.
A memorial mass for Santayana is planned on Saturday, February 27 at St. Andrew’s Catholic Church in Coral Springs and interment follows at the Lady Queen of Heaven in North Lauderdale, Florida.

Funeral arrangements for Villena are pending.