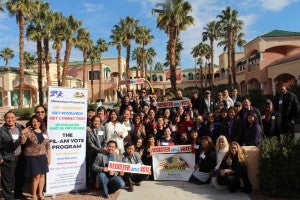 “They are emerging as a key voting block that could significantly influence national and local elections in the coming years,” he adds.

Confirming this trend is a report from the Center for American Progress, which shows Asian American voters in the last decade nearly doubling from more than 2 million voters in 2000 to 3.9 million voters by 2012, and is estimated to reach 5 percent of the voters nationally by 2025 and 10 percent by 2044.

“As the second largest Asian American population in the U.S., our challenge as Filipino Americans is to translate these numbers into political power,” adds Mallonga. “That means being actively engaged as informed citizens, exercising our voting rights and casting our ballots on Election Day.”

To achieve this goal, NaFFAA, a non-partisan organization recognized by Washington policy-makers, private industry and other advocacy groups as the voice of Filipinos and Filipino Americans throughout the United States, will launch Fil-Am Vote on July 25-27, 2016.

“We know that by increasing the voting ranks of the Filipino American community, we will not only make our voices heard but will most assuredly make a difference in determining who will lead our country,” Amor adds.

Fil-Am Vote’s launching, Amor points out, is not only “an affirmation of our civic responsibility as American citizens, but also a commemoration of the 1986 People Power Revolution in the Philippines, which occurred 30 years ago this week. That historic moment taught the world what people can do collectively to assert their democratic rights to vote, fight against election fraud and ensure that the people’s will is carried out.

“Fil-Am Vote, therefore, draws from the energy, inspiration, passion and courage of the millions of Filipinos who used the ballot box to make their voices heard. Despite the threat by an authoritarian regime to suppress their right to participate in the electoral process, the Filipino people stood up to make sure each vote counted.

“Fil-Am Vote honors this powerful movement and is committed to carrying on the legacy of full, active civic engagement of the Filipino American community.”

The latest U.S. Census Bureau data indicate there are 2,790,928 potential Filipino voters nationwide. Figures from the U.S. Citizenship & Immigration Services also show that Filipinos are among the top AAPI groups with the highest naturalization rates.

“But we have been lagging behind in terms of registered voters and voter turn-out,” explains Fil-Am Vote national adviser Gloria T. Caoile of Henderson, Nevada. “Our numbers won’t matter unless we enlist community members to register and show up at polling places on November 8 to cast their votes.”

NaFFAA Regional Chair Myrna Farinas Reyes of San Diego, California, is calling on the Filipino American community to “come together and demonstrate our collective strength as an influential voting bloc. Let us proudly and unequivocally assert ‘I am a Filipino American Voter.’”