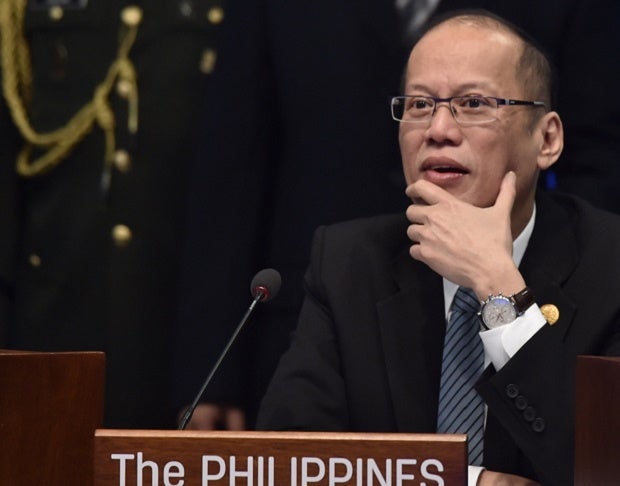 President Benigno Aquino III arrived on Friday from a two-day summit between the United States and the Association of Southeast Asian Nations (Asean) in California, upbeat over the stronger backing the Philippines has received in its effort to resolve its maritime row with China.

“The good news is, with regard to the talks over maritime concerns, the support of those we had a dialogue with has become clear. If there were only a few (Asean countries) who mentioned this issue before, the stand of the Asean and the United States is clear with the joint statement released after the meeting: we have to maintain the security, stability and freedom of navigation in the West Philippine Sea and the South China Sea, and any disagreements should be resolved through a peaceful process, following international law,” President Aquino said in Filipino.

The Asean-US Summit declaration avoided direct reference to China but it called for an easing of tensions and a “halt” in the reclamation and construction activities and “militarization” in the disputed areas in the South China Sea, a major international trade route.

Throughout President Aquino’s six-year term, he had always raised the maritime row in Asean summits, urging the regional bloc to finalize and adopt a legally binding Code of Conduct in the South China Sea between Asean and China.

It was not an easy campaign as other Asean members like Laos and Cambodia have close ties with China.

As the special meeting winded down, China deployed two batteries of surface-to-air missile on Woody Island in the Paracel Islands, which Vietnam claims.

On Wednesday, security expert Chester Cabalza said whatever takes place in the disputed areas in the South China Sea, whether on the Paracel or the Spratlys, would have a “domino effect” for the Philippines.

“When we talk of the whole South China Sea, whatever you do on one part will affect the other areas. It has implications on the regional security. Whatever they do on the other islands in the South China Sea, they can do to the islands we are claiming,” Cabalza told the Inquirer by phone.

Cabalza said that while there are no reports that China has deployed missiles on any of the artificial islands in the West Philippine Sea, he sees an already “increasing militarization” in the South China Sea.

“Given that you have the surface to missile on Paracel islands, it would impact on the other islands as well,” Cabalza said.

Cabalza said the different policies on the West Philippine Sea issue given by the politicians running for president in the May 2016 elections, considering their diverse backgrounds, puts the country in a vulnerable situation.

“We don’t have a unified and continuous policy regarding the West Philippine Sea issue,” Cabalza said.